Hugo In Tokyo Pt I – The World Cup

My friend Hugo arrived from Sweden on June 19th with a promise of spending my week off with him sightseeing, drinking and watching the World Cup. The former part can be seen in more detail in the next couple of posts and the drinking only really happened once or twice. The latter didn’t exactly go to plan either as he was always tired by the time the matches came on and so slept his way through most of the games leaving me to go it alone.

We went out for the Japan v Holland game within minutes of being re-united and my girlfriend joined us so we didn’t see too much of that for all the chat taking place. Apart from that game we didn’t watch any games in bars which has as much to do with the games being on at a time here which isn’t convenient for the last train home. He managed to watch most of the England v Germany game with me before either calling it a night or just giving up on our boys who were sadly beaten by the better team.

On Hugo’s first proper day we started off in Shinjuku and went up to the 45th floor of the Metropolitan government building for views of the concrete jungle for as far as the eye could see. Yoyogi park, Harajuku and Shibuya all followed on foot and it was while in Yoyogi that we stumbled upon the Samurai Blue Park which had been specially set up for the World Cup for as long as Japan were in the tournament which turned out to be one game longer than most people though, including the Japanese themselves!. It was basically just a huge tent/marquee with some sponsor stalls and big TV screens as well as some exhibits of old Japan shirts.

The controversial ‘jabulani’ World Cup ball from Adidas was also on show and outside was a mini pitch for kids to have a kick around on. I saw an advertisement inviting people to watch the Japan v Holland game there the night before but I have no idea if alcohol was available while watching it. 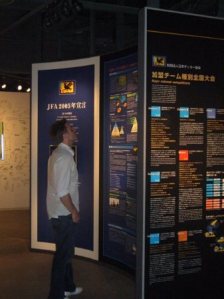 A week after that I took Hugo to the Japan World Cup Museum in Ochanomizu which I visited four years ago and is a nice museum featuring many exhibits from the World Cup jointly hosted by Japan in 2002 as well as some other stuff from Japan’s football history. 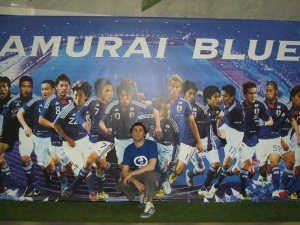 1 Response to Hugo In Tokyo Pt I – The World Cup