You may think that an afternoon of seeking out ‘Casino Royale‘ and Star Wars Episode II film scenes at the Villa del Balbianello would be enough for one day. Not for me though because while I was walking back to my hotel I came across the Parco Civico di Tremezzo which featured in a cut scene from ‘Attack of the Clones‘ and was where Anakin and Padmé left Naboo for Tatooine following the former’s nightmare about his mother being in pain back on his home planet. That’s one train of thought anyway due to the clothes they are wearing but the very chunky ‘Star Wars 365 Days’ book by John Knoll suggests that their spaceship landed near here and then they got into a gondola and sped across the lake to the Lake retreat a.k.a. the Villa del Balbianello. We saw that at the very start of Euro Trip 2010 Pt VI but it appears that their clothes have changed there whereas they are the same on arrival in Tatooine as they are in the first photo below. 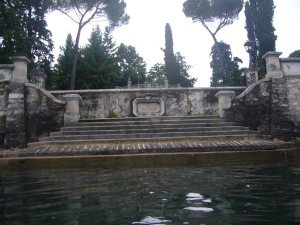 I took some pictures of the steps and that rectangular sign at the top of them as well as the male toilets where Hayden Christensen (Anakin) got changed into his brown Jedi robe without complaint. Natalie Portman (Padmé) is a much bigger star and supposedly demanded something better (see comments below for the real story on this) so the crew cleared out a little domed building for her which was just a stones throw away from the steps seen in the screenshot. I woke up early the following morning and in order to recreate this screenshot I had to get into the water with my camera which wasn’t easy as it was deep and swimming out for 10 metres or so while holding a camera up in the air out of the water is blo*dy difficult!! All that effort for a cut scene which didn’t even make it on to the deleted scenes chapter of the DVD!! 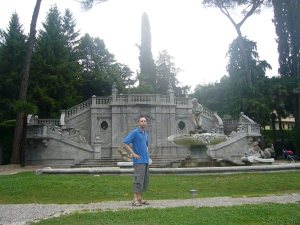 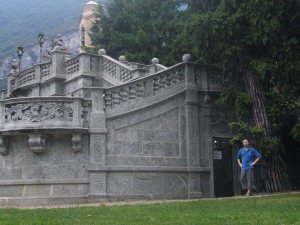 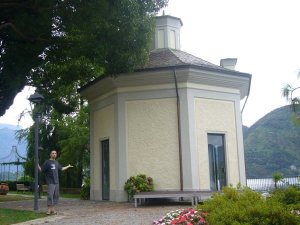 Later that morning I set out on foot following the excellent directions from Mark Dermul’s third Star Wars filming locations book to find the picnic meadow where Anakin and Padmé get closer. Lots of overgrown grass in the foreground of some amazing, huge waterfalls in the film but in reality it was just a private field which could be anywhere in the world to be honest! The falls and the shaaks (indigenous Naboo animals) were added by CGI of course and this field can only really be recognised thanks to some behind the scenes pictures in the aforementioned John Knoll book. By that I mean the shabby building in one of my photo’s. There had been a heavy downpour the night before so with the grass still wet I could only crouch down rather than imitate their sitting pose. 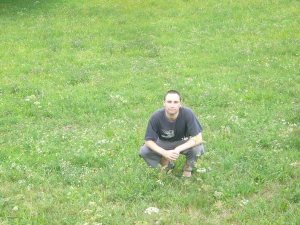 A different field was used nearby for the scene where Anakin was playing around on the back of the Shaak until he fell off and played dead in the name of luring Padmé into his arms whereby the viewer assumes they kiss not that we see that. The rodeo bit was obviously done against a blue screen but the rolling around was done in this very field which again really could be any grassy area.

A restaurant called Fagurida which was frequented by Sir Alec Guiness (Obi Wan Kenobi) in the 1960’s and a house used as Hayden Christensen’s and Natalie Portman’s dressing room rounded off my Star Wars adventure. 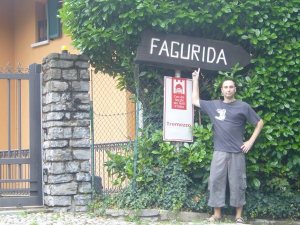