March 3rd is Hina Matsuri (Doll Festival) in Japan which is a day celebrating girls’ health and happiness. Some Japanese people have dressed up their dolls (not your ‘barbie’ type of doll by the way!) this last week and put them on display in the best room of the house. And some students even ask me if there’s a similar thing in the UK! As if!

On Sunday Gideon and I met up for a more traditional Hina Matsuri event involving 800 yen paper boxes (with a kind-of pop up male and female dolls on it dressed in colourful kimonos) being dropped down a slide onto the river where they float down the river carrying evil spirits away with them.

Some cynics may say that’s bad news for the place where they all end up but in reality they only made it a few metres from the slide before they sank! This disappointed me as I’d envisaged a river full of floating dolls not too dis-similar from Chinese lanterns being lit and sent down a river. 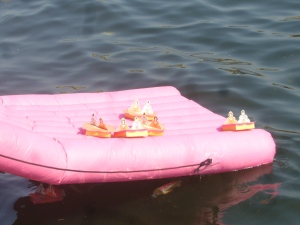 Taking place on the banks of the Sumida-gawa river in Asakusa near Azumibashi bridge there were three pink slides as well as a boat across the water full of people (who had no doubt paid a lot to be on it) sending the paper doll things down its own slide. This is the kind of event which one can only watch for so long before you get bored!