Theres no doubt that this movie had a big influence on music culture and fashion as captured vividly by director Franc Roddam. It’s a mix of 60’s music and violence which follows Jimmy (Phil Daniels) on a voyage of discovery that is occasionally funny but also very sad at times and anyone searching for identity and purpose can sympathise with him.

Like many people of my age I first knew the films stars Phil Daniels and Leslie Ash respectively as that bloke on Blur’s ‘Parklife’ record and that woman who lived upstairs from Gary and Tony in the BBC sitcom ‘Men Behave Badly‘ and didn’t get round to seeing this film till much, much later in life.

Jimmy’s house is 115 (*) Wells House Road (below) and is a 20 minute walk from North Acton Station on the Central Line. I left empty handed the first time I tried to find this place but I tried again and with the aid of a map it was a bit easier……. although it still took me a while to find my bearings. 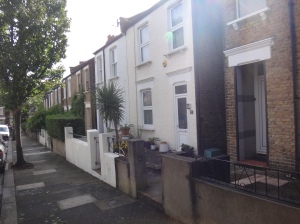 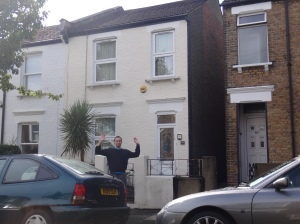 At 48 Goldhawk Road is ‘A. Cooke’s‘ pie and mash shop (below) which is a far more typical London dish than fish and chips. This is where Jimmy and his mate Kevin eat 10 minutes into the film following their surprising re-union in the bath-house. I took some time-out from my hectic location-hunting schedule to have pie and mash with a bit of parsley sauce for four pounds and it went down very well too.

The ‘Kitchener Road’ party which Jimmy attends on 14 mins is actually on Clarendon Road (below) in Wembley. 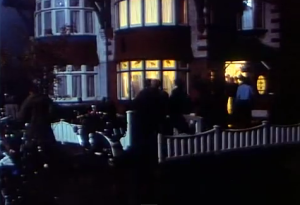 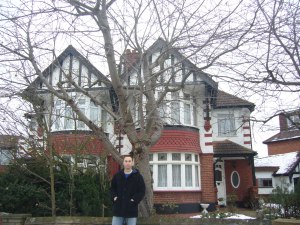 ‘Quadrophenia‘ hits the 31 minute mark when Jimmy gives Steph (Leslie Ash) a ride on his scooter along Goldhawk Road (below) somewhere between Bamborough Gardens and Woodger Road.

The Mods hangout was ‘s&m cafe’ which stands for sausage and mash by the way and not what many of you may be thinking! It was at 4-6 Essex Road (below) near Angel Station and I use the word ‘was’ as since I took this photo in December 2010 it has closed down. It appeared on screen after 33 mins. 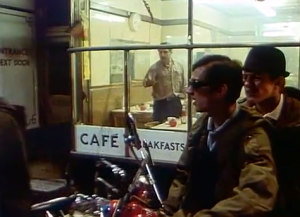 Just a few metres away from A. Cookes on Goldhawk Road is Shepherd’s Bush Market (below) near Goldhawk Road station. This can be seen on 36 mins albeit in very dark fashion as is much of the movie which is mostly set in the night which isn’t so good for someone like me hoping to show and compare screenshots with their modern day equivalent. The bustling market street is a fairly narrow place and is the passage where the Mods chase the leatherclad rocker Kevin and beat him up. 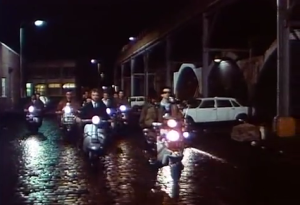 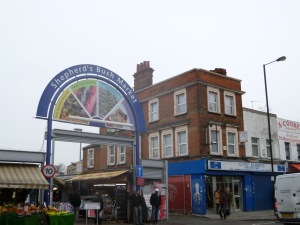 Paddington Station appears next as we see Jimmy, and indeed the rest of the film, moving down to Brighton where Sting makes his appearance as Ace. The Sussex locations used included Grand Hotel, Palace Pier, Waterfront Cafe and the dancehall where Jimmy leaps from the balcony is now the Brighton Sea Life Centre.

(*) Thanks to Shawn from Brisbane who informed me that Jimmys’ house was number 75 and not 115. They both look the same but 75 has the train tracks closer at the rear. Also Phil Daniels celebrated his 19th birthday cake with the crew outside number 77.