When it comes to romantic comedies the combination of writer Richard Curtis and actor Hugh Grant have come up with a fair few crackers with London often at the heart of them albeit a more rounded and well polished version of the capital. As I’m missing a few pivotal locations from each movie I thought it a good idea to cobble together the likes of ‘Four Weddings And A Funeral‘ (1994), ‘Notting Hill‘ (1999) and ‘Love Actually‘ (2003) together into one super rom-com special.

Somerset House (below) is a short distance from Temple tube station and appears as scenery footage on 4 minutes in ‘Love Actually‘ but for me it was more famously used in two Pierce Brosnan-era Bond films; ‘Goldeneye‘ (1995) and ‘Tomorrow Never Dies‘ (1997). 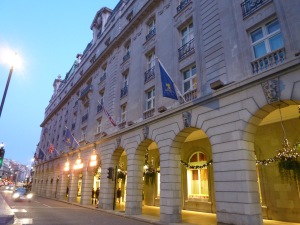 The Ritz (above) at 150 Piccadilly is where some memorable press interview scenes were filmed in ‘Notting Hill.‘ Japanese restaurant Nobu (below) at 19 Old Park Lane was used in the same film and was where Julia Roberts confronted a couple of guys who she was being slagged off by. 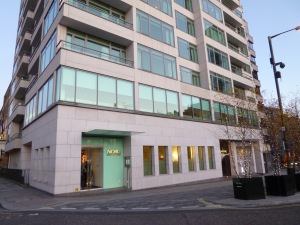 Hugh Grant’s flat in ‘Four Weddings and a Funeral‘ is 22 Highbury Terrace (above) across from the park of Highbury Fields. Andie MacDowell turned up there in the rain at the climax of the film.

It’s now a boring office but in ‘Love Actually‘, 26-27 Great Sutton Street (below) was the nude gallery of Christmas art by Mark (Andrew Lincoln) as seen on 35 minutes.

The fourth and final wedding in ‘Four Weddings…‘ took place at the Church of St Bartholomew the Great (above) close to Smithfield Market by Barbican tube station. Two ‘Notting Hill‘ locations now with the blue shop pictured below the more interesting one as it was here that normal guy Hugh Grant worked in the ‘Travel Book Company’ where he met the very famous Anna Scott played by Julia Roberts. Its now, perhaps aptly, named Notting Hill and is on 142 Portobello Road. 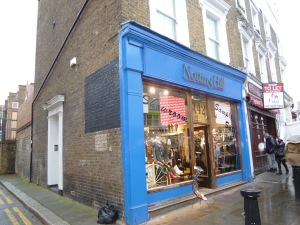 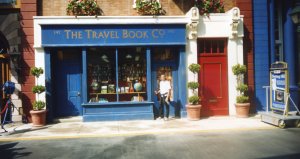 The actual Travel Bookshop on which it was based is at 13 Blenheim Crescent and the picture which I’m outside above was taken in 2002 at Universal Studios in Hollywood where much of the movie was actually made.

Poplar Road (below) in Herne Hill is the street in ‘Love Actually‘ where the Prime Minister goes knocking on doors to try and find Natalie (Martine McCutcheon) and after singing a couple of carols, he and his chauffeur eventually get lucky at number 102. It’s a 15 minute walk from Denmark Hill station on the London Overground line.

Back in Notting Hill and further along Portobello Road at number 201 is Saints Tattoo Parlour (below) which could be seen in the opening montage of the same film as a drunk guy exits the shop wondering why on earth he got a tattoo saying “I Love Ken.”

The Salvation Army building (above) a couple of doors along at number 205 is where the ‘Notting Hill‘ four seasons sequence ends in Spring.

56 minutes into ‘Love Actually‘, Mark (Andrew Lincoln) emerges from the back entrance of Oxo Tower Wharf building (below) on Barge House Street after Juliet (Keira Knightley) discovers his real feelings for her having seen his wedding video of close ups of her beautiful face.

Dido’s ‘Here With Me‘ provides the soundtrack as he leaves feeling gutted and continues on through the courtyard (above) and on to the banks of the Thames River.

Close to Bayswater Underground station is Whitley’s (below); the department store seen at the start of the film on 4 minutes when there are still 5 weeks to Christmas. 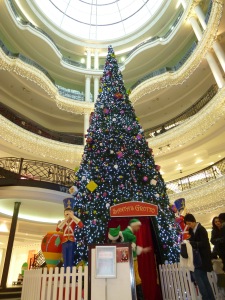 In ‘Four Weddings…‘ Carrie (Andie MacDowell) tries on wedding dresses in Albrissi at 1 Sloane Square (above) which is now a vacant store.

The Millennium Bridge (below) is briefly seen about 18 minutes into ‘Love Actually‘. 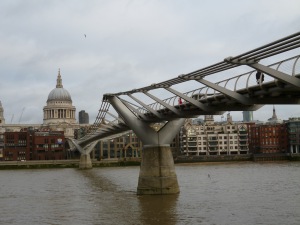 In the same film we see Alan Rickman’s character Harry buy a necklace for Mia in Selfridges (above) at 400 Oxford Street. This was one of the funniest scenes where Rowan Atkinson appears as the shop assistant who takes an eternity to wrap the gift whilst Harry gets nervous about the imminent arrival of his wife played by Emma Thompson.