“Where are you gonna go for British food then?” is probably the most common question I’ve been asked since I started regularly dining out at international restaurants in Tokyo. Whilst most of the many British bars in and around Tokyo serve fish and chips they don’t do too many other actual British dishes.

One such place that does though is the Meguro Tavern (below) which is just a few minutes walk from JR Meguro station. This pub has been in Tokyo since 1998 and as far as I know is the only place to offer a traditional Sunday roast including roast beef (Aus), roast lamb (NZ) and roast pork (Canada/Hokkaido), with all the trimmings (roast potatoes, carrots, peas, sprouts, sweetcorn, gravy, mint sauce etc) including Yorkshire Puddings (below).

In the food obsessed culture of Japan it can be quite frustrating to hear constant negative comments about British food which is fair enough if they’ve been to Britain and sampled a  few dishes. However, most haven’t and are basing their assumptions on one meal (fish & chips) which is of course a greasy one and that, along with other British dishes, is a very different kind of dish to the rice and noodle staples served up here in the East.

The Meguro Tavern serve all manner of proper British dishes across the week but we were there for the roast (starting from 12:30pm) which is a meal I haven’t had since I was back in my motherland in January 2012. In fact it was actually a bit weird to have a roast dinner cooked by someone other than my mum.

As it is a help yourself buffet style service, I piled my plate up with all the delicious looking food without much thought for the ensuing pictures I would be taking of it which is why they ones below don’t look too arty. The food was absolutely fantastic and I went back for seconds and even a third round as it is not everyday that I get to sample a taste of home. My girlfriends parents Riuko and Mikio have been overly kind to me and very welcoming so I decided to treat them and both were very impressed, way more than they thought they would be beforehand. 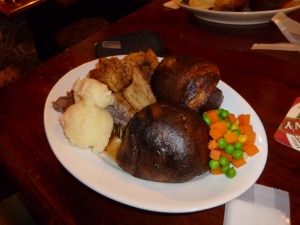 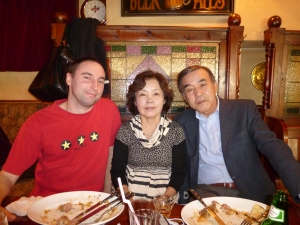 It costs 1950 yen for what is called ‘The Carvery’ and you can have as much as you like as long as you are still drinking. The drinks may be slightly on the expensive side at around 1000 yen per pint (£7) but all-in-all just under 4000 yen for a couple of lunchtime pints and the only roast dinner in Tokyo isn’t too bad. It certainly whetted my appetite for sampling a few more of their other meals and I sure do intend to make my return soon.

UPDATE: All-you-can-eat is no more! Since resuming on 4th October 2015, ‘The Carvery’ now costs 3000 yen and includes a drink. The meat is served up by the chef but you help yourself to the veggies so best to pile them up. If you do want more meat though then you have to pay another 1000 yen for a second round.

A Leicester City fan teaching English in Japan
View all posts by tokyofox →
This entry was posted in Food & Drink and tagged best british pub in tokyo, british food in Tokyo, meguro tavern, roast potatoes in tokyo, sunday roast in tokyo, the carvery, where is the meguro tavern, yorkshire puddings in tokyo. Bookmark the permalink.