Whenever there’s a World Cup on the horizon the media tend to look back at past tournaments and so, as a Japanese based website, this as a good opportunity to look back at the 2002 tournament which Japan co-hosted alongside neighbours South Korea. Tokyo Fox is going to take a deeper look at the opening titles for both the BBC and ITV coverage and dissect it with regard to what images of Japan were shown.

You can watch the BBC opening titles here and the ITV ones here.

This was a World Cup which I absorbed like no other as I had just returned from a long backpacking trip and so was free to consume each and every game live (despite the early morning kick offs in UK time) as well as the highlights shows and a lot of the BBC Radio 5 Live output too. I was very keen to see both the host countries play but particularly Japan as I had met many great Japanese guys during my year in Australia. I had also sounded out the possibility of moving to the country to work as a teacher either on the JET programme or for Nova. It would take another 15 months or so for me to finally get round to doing the latter though!

Now, I’m usually happy to see the World Cup games whichever side they’re being shown on though of course the BBC always wins out when the two go to head to head which they did for England’s 2nd round and quarter final games as well as the final of course. The fact that BBC presenter (and former Foxes striker!) Gary Lineker lived in Japan for a couple of years in the early 90’s when he was plying his trade with Nagoya Grampus Eight gave the beeb that extra insight into football and life in the Far East not that they really ever need such an advantage as being commercial-free is always gonna win the ratings war at the end of the day. 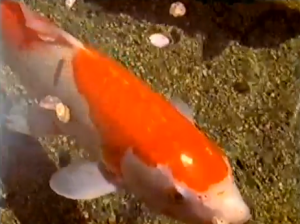 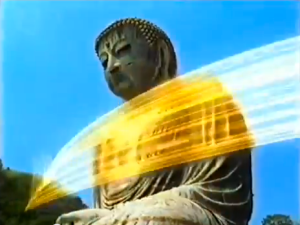 Faithless provided the theme tune to the BBC’s coverage as a sample of their 3rd single ‘Tarantula‘ from the 2001 album ‘Outrospective‘ played over the top as exotic images from Korea and Japan were shown in a typical fast-paced and cleverly edited style. Of course all the classic and clichéd Japanese things like sumo, geisha, Mount Fuji and the shinkansen (bullet train) all feature as well as koi (carp), the Great Buddha in Kamakura, Shibuya crossing and Itsukushima shrine at Miyajima in Hiroshima-ken.

Those iconic images were then blended in with some great clips of World Cup footballing past before culminating with the torii gate of Miyajima. 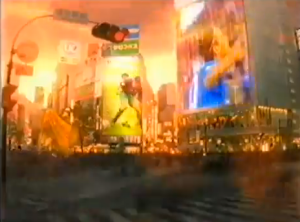 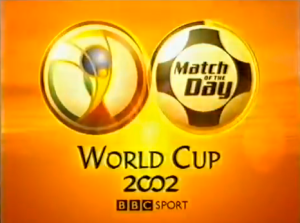 Over on ITV, they yet again went down the opera route which both stations have done a lot ever since the huge success of Pavarotti and ‘Nessun Dorma‘ in Italia ’90. Their theme was ‘Madame Butterfly (One Fine Day)‘ as performed by the Opera Babes which has some reference to Nagasaki, Japan and Japanese culture though I’m not exactly sure what! 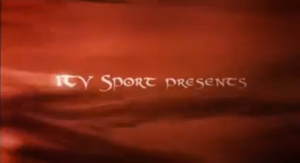 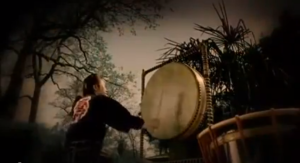 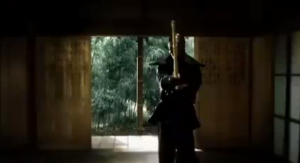 Whereas the BBC had places in Japan in their titles, ITV went for cultural images of quintessential Japanese iconography like kendo and geisha with them appearing amid a mix of players in action and all layered over cloth (Korean hanbok?) blowing about in the wind. Of course, most British people’s knowledge of Japan and Korea is fairly limited so the broadcasters can’t really be blamed for using simple images which the viewers can quickly recognise in the split second its shown on air. 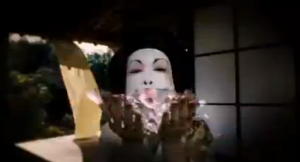 The 2002 World Cup will be remembered by me for the shock results and the exuberance of the locals. Despite initial concerns by some that Asia lacked a passion for football the local support contrasted such criticism as they lent their support not just to their own team but also to the other nations involved. Although the tournament was considered a triumph for Japan it was neighbours South Korea who reigned supreme in Asia by reaching the semi-finals.

* If you’re in Japan and fancy rewinding back to 2002 then there are a couple of places which may be of interest. The Japan Football Museum is in Ochanomizu and has a wealth of memorabilia and information relating to that tournament in particular. 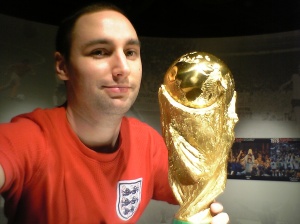 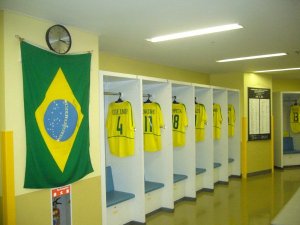 The second is the Nissan Stadium (sometimes referred to as International Stadium Yokohama) in Yokohama which played host to the final between Brazil and Germany as well as three group games. It is possible to do a stadium tour featuring a reproduction of the Brazil team’s dressing room including replica shirts and signed lockers, a warm-up training room, player hand and footprints, the usual displays of photos, balls, shirts, flags and tickets and of course you get the chance to walk out of the tunnel and go pitch side.