Starting off at Ryoanji temple in Kyoto this French film has a Belgian woman called Amélie (Sylvie Testud) looking back on her year at a Japanese corporation in Tokyo in 1990. Having been brought up in Japan until the age of five she decides to return and has a one year contract working as a translator for the giant Yumimoto Corporation.

She is a determined young woman who suffers for doing things in a western manner in a country which rewards loyalty rather than initiative and workers are promoted based on their years served instead of their track record. Of course, its hammed up a bit on screen but there’s an element of truth to most of what we see in this office based comedy and it’s this kind of mindset that may explain why the Japanese economy has been in a slump for 15 years or so. 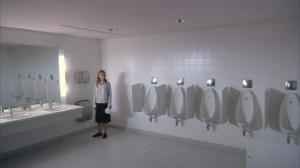 It may be a comedy but this is certainly nothing like BBC sitcom ‘The Office‘! The entire movie takes place in the office (filmed in Paris) so we sadly don’t get any hint of what life is like outside of their workplace. It would’ve been nice to see a glimpse of Amélie’s home life as it’s this kind of thing which helps form and develop a character.

Having tried and failed to work and integrate into the conformity of a Japanese office, Amélie works her way down the corporate ladder amid abuse, humiliation and insane routine as she fails to understand how things are done in Japan. She goes from doing great bilingual research (albeit work that violates the all important company procedure!) to re-setting calendars to serving coffee to cleaning the toilets! In between all that she’s ordered to not speak Japanese when clients and visitors are present as they wouldn’t be able to have any feeling of trust if they knew the white girl understood their language!

Another degrading assignment involves her being made to copy the same document over and over again. No care for the environment and all the paper wasted from Mr Saito as he demands it be 100% accurate with the text dead on centre to the exact millimetre. Anything less is just unacceptable!

The subject matter of this film is fascinating in itself with the protagonist finding herself in these strange situations which is fine for the first half of the movie but after that it failed to really develop any further. That is probably because it’s an autobiographical account of real-life experiences with very little added in the way of artistic license. The film is based on a book which may explain why the director uses voice over (a little too much but I guess some mother-tongue is needed to keep the natives attentive) to presumably portray essential passages from it.

Taking place in 1990, one would hope that this is a caricature of Japanese offices of that time and that they are no longer like this in any way but I still have my doubts about that! A lot of the story revolves around the inability to develop any human relations with her colleagues, particularly the submissive Fubuki; her female work leader. There are some slight lesbian undertones as Amélie adulates her and wants to please her but this is answered with sadistic pleasure as she is continuously belittled. Amélie realises that the best way to deal with it all is in humour and she uses her wild imagination to play the game of obedience and passiveness which her co-workers excel in.

In ‘Stupeur et Tremblements‘, to give it it’s original French title, Amélie has daydreams of falling out the window and floating over the Tokyo skyline as she’s desperate to escape and for many it’s hard to understand why anyone would put up with all the abuse and still be determined to continue working in such an environment. 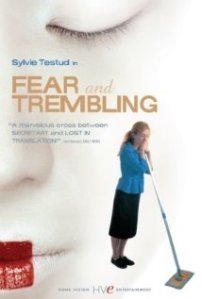 A Leicester City fan teaching English in Japan
View all posts by tokyofox →
This entry was posted in Review: Films Set In Japan and tagged fear and trembling review, films set in Japan, films set in kyoto, french film set in japan, Ryoanji temple Kyoto, Stupeur et Tremblements, tokyofox, watch online free, what are japanese offices like to work in?. Bookmark the permalink.