When Avril Lavigne burst onto the scene in the early 2000’s I have to say that I warmed to the Canadian singer-songwriter quite quickly and, though not my usual music taste, she did come up with some cracking tunes like ‘Complicated‘ and ‘I’m With You‘ which sounded good on the radio.

Fast forward a decade or so and you have ‘Hello Kitty‘!! People have accused the video of being racist and whatever but in my opinion it’s main crime is that it is an absolutely awful song!! Truly terrible and quite possibly one of the worst songs ever! Oh and for the record, the accusations of racism are pathetic and wide of the mark.

As always with music videos the action comes thick and fast with all the footage edited together and interspersed throughout its 3:16 duration. It was filmed in March 2014 off the back of her Asian tour and wrapped in 12 hours.

Miyahsita Park (above) at 1-15-9 Shibuya was where all the homeless people of the area converged a few years back but it’s gone through a slight rejuvenation since then and Avril and the four identical looking dancers in the background (the idea of the Japanese director before anyone plays the racism card!) stood on the bridge behind the climbing area and between the two futsal (similar to 5-a-side football) pitches. The trains travel over the bridge in their background and the yellow logo of Tower Records is clearly visible beyond that. 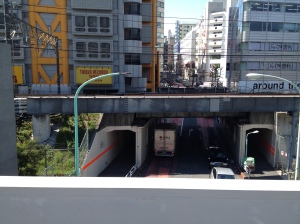 Candy-a-go-go (1-7-1 Jingumae, Shibuya-ku) on Takeshita-dori in Harajuku is situated on the lower half of the street on the right assuming you’re walking down the street from JR Harajuku station. 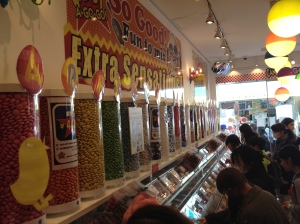 Needless to say that this popular shopping street is always jam-packed with young girls and tourists alike and trying to get any clear shots in this American-style candy store (below) is not easy! The music video for this song is even played on the TV screens behind the sales assistants. 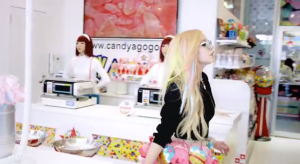 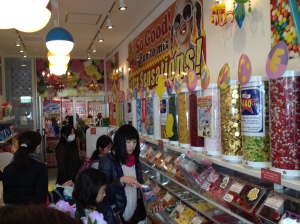 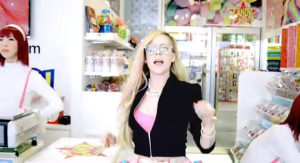 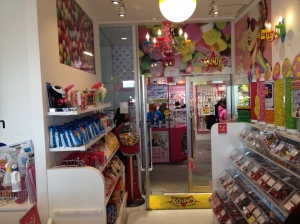 The sake and sushi scenes (below) could quite frankly have been filmed anywhere and quite possibly not even in a restaurant. 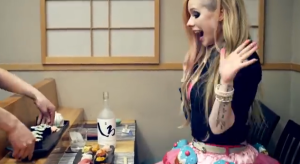 The black and white Harajuku backstreet scenes feature the Ralph Lauren store (4-25-15 Jingumae, Shibuya-ku) to the left of Avril (below) and this shopping lane is the third street on your left going towards Omotesando after the Meiji-dori and Omotesando-dori junction. 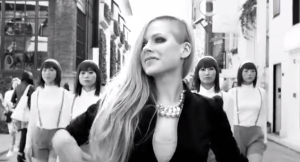 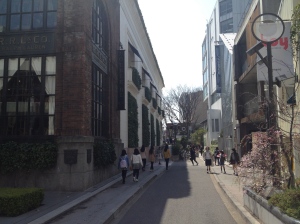