The sixth film in the X-Men franchise paid little respect for distance and time as the movie zig-zagged its way across Tokyo and then south to Nagasaki. However, no filming actually took place in the city which will always be remembered for the atomic bomb that was dropped on the place on the 9th of August in 1945. In fact, one can’t even go south from Ueno station where they board, as the Shinkansen (bullet train) only heads north from that station.

Anyhow, on 45 minutes Logan (a.k.a. Wolverine) and Mariko disembark at what is actually JR Fukuyama station in the east of Hiroshima prefecture. All the action (well all 17 seconds!) takes place on the South gate side (the opposite side to where Fukuyama-jo castle sits) as the two take one of the exits. The blue signed Nippon Travel Agency can be seen in the background although that style of sign is no longer on display. 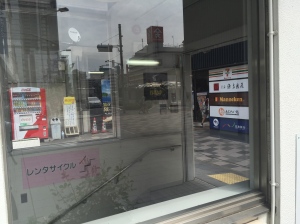 The crew filmed in Fukuyama for just one day on the 4th of September 2012 and Sun Station Terrace (or Sansute as its abbreviated to in Japanese) is in the background of Logan and Mariko with the bus station on the right and the red JTB is noticeable in the distance.

Whilst reinforcing their need to find some place safe and get off the streets away from the trailing yakuza they walk by a statue and decide which direction to go in. The station has been renovated a bit since filming took place in 2012 with a new building in front of the statue….or behind it as one views it on screen! This statue is called Izurachojin (basically five cove fisherman) and was made by Denchu Hirafushi and could also be seen in episode 11 (Koi wa Yukue Fumei – Love is Missing) of the 2005 Japanese animated series ‘Kamichu!‘.

The Nippon Travel Agency can be seen in the background again as Logan asks where downtown is. She replies that it’s straight ahead and it may well have been in that same direction albeit some 700+ km away!!

The love hotel which they subsequently check into is actually back in Tokyo. It’s the Nakagin Capsule Tower (8-10-6 Ginza) which in reality is not a place for couples to get it on but is home to many unmarried salarymen wanting to stay in a small place. The interior of these tiny apartments could be seen in episode four of the BBC documentary ‘Journeys Into The Ring Of Fire‘ (2006). The building is a fine example of Tokyo modern architecture and now you can actually stay there thanks to airbnb website.

The “Nagasaki” journey then continues on to Omi-shima and Tomonoura and you can see the Wolverine locations in the latter here.