At the start of April 2015 Leicester City were rooted to the bottom of the Premier League seven points from safety and now one year on they are top of the table and seven points ahead of nearest rivals Spurs. What an incredible 12 months it’s been for Foxes fans. Of course, there’s no way in hell I’m gonna say it’s all over but, as it stands, things are looking pretty good!

When I was interviewed by Ian Stringer on BBC Radio Leicester in February 2014 I jokingly told him that I was the “Chairman of the Leicester City Supporters Club – 1 member and growing.” It was a flippant throwaway comment but two years on and things have certainly changed. Of course there were always a few supporters in and around Tokyo that I didn’t know about but numbers have certainly grown since then though I wonder how many of them are at these events purely and only because of Okazaki.

The 3rd LCFC supporters night took place for yesterdays game against Southampton which was a 9:30 pm kick off (1:30 pm BST) over here and there were about 20 of us in one of the branches of The Hub in Shinjuku. The staff of this “British” chain of pubs have all been wearing blue football shirts recently but they are sadly the ones of last years Premier League champions Chelsea!

This is the match that matters in Japan for it features the teams which the two Japanese players in the Premier League play for. Sadly, defender Maya Yoshida was only on the bench for Southampton but Shinji Okazaki took his regular starting position in a Leicester team that has picked itself for a long time now. 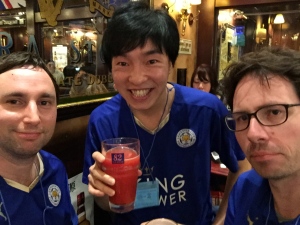 The commentary was actually on in Japanese when the match started but thankfully one of the European guys spoke up to get it changed to English which I was very glad of. After all, it is supposed to be a British bar so should feel a bit more like it right?! It was a fairly sluggish start from the home team but once Captain Morgan headed home on 38 minutes I was surprisingly comfortable with the situation given our recent form for holding onto single goal leads.

The atmosphere in the pub was good and there was even the occasional sing-song moment as well as plenty of clapping as we willed on Leicester from 9000+ kilometres away. 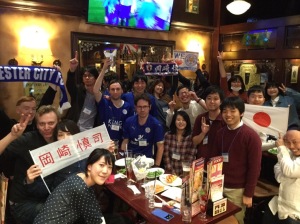 Personally, I haven’t watched such an important Leicester game in a relaxed manner since the Coca Cola Cup semi-final 2nd leg (against Wimbledon) in 1997. Alcohol was inevitably the reason for that and prior to this match I had spent the afternoon drinking beer in Inokashira Park (Kichijoji) for our annual cherry blossom party. What a day it was and now with just six games to go the miracle could actually happen. Not even a fox should count their chickens though! 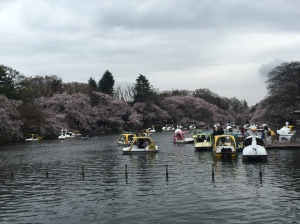