Going to Kyoto in the Golden Week holiday season was one event that was filling me with dread ahead of our trip to the ancient city, and though it was inevitably busy it was never quite as bad as I had imagined it would be. The original idea was to do Kyoto on May 4th but once we extended our hotel stay by another night the better day was to be the 5th as that was the last day of the holidays and therefore many people would be travelling that day.

Within minutes of arriving at Kyoto station we had boarded the #205 bus and was on our way to Kinkakuji a.k.a. The Golden Pavilion (below) not that we had any idea how long it would take to get there! It was basically a one-road journey but due to the traffic (which actually wasn’t anywhere near as it can be in this city) it still took about 20 minutes to reach. The actual name of this place is Rokuon-ji Temple and, despite the crowds and the conveyor-belt nature of walking around it, it never fails to impress. Unlike other places in Kyoto though, this tends to be a fairly short stop on the tourist trail.

It was quite easy to take a bus back to the station after that and from there we then hit Fushimi Inari Shrine (below) which you can read all about here as it merits it’s own individual post.

Fushimi-Inari was a longer and more tiring experience than expected so after that we went to Gion geisha district (below) though not so directly as we got on the wrong train which went past the station where we were supposed to stop at. Gion is full of native and foreign tourists and is a bit touristy but is a nice place to look around with its beautiful quaint buildings and streets. 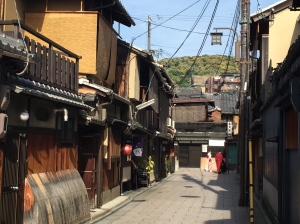 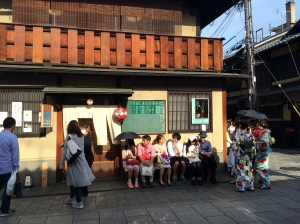 No trip to Kyoto is usually complete without paying a visit to Kiyomizudera Temple but by the time we were done in Gion we were all satisfied with what we’d got out of Kyoto. Having been to that temple three or four times before I wasn’t so fussed about revisiting it so we decided to head back to Osaka.

You can read other ‘Parents In Japan 2016′ posts by clicking on these links: