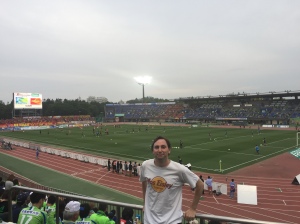 Hiratsuka was the location for our second match of the day in Kanagawa prefecture. I hadn’t really considered it’s actual distance from Yokohama for it actually took another hour from there and I was quite shocked at it’s geographical location when I later looked at a map.

Regular buses to the Shonan BMW Stadium were thankfully on hand (it would’ve been a 40 minute walk otherwise) from bus stop #11 (I think!) and about ten minutes later we were dropped off in the car park of a vast park not too dis-similar to those at Omiya and Kashiwa where there’s no evidence of a football ground until you get much deeper into the woods. 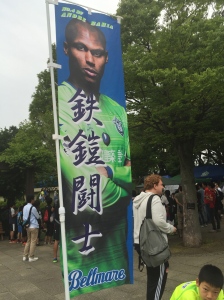 In true Japanese-style it was full of food stalls with long lines and there were some nice green areas and water features nearby where we relaxed with a beer once we’d purchased our tickets which, at ‎¥3,100 yen, were some of the most expensive ones I’ve bought albeit only a few hundred yen more than normal. As the earlier Yokohama Marinos match was free though, I wasn’t too fussed.

After the big stadium emptiness of the Nissan Stadium prior to this, the 18,500 capacity Shonan ground (which opened in 1987) was a more welcome sight and had a more authentic local feel about it for us two misty-eyed Brits who have both visited our fair share of more traditional grounds in the past. Yet again though it was another football stadium with a running track around it meaning the fanatical home support are just too far away from the pitch. 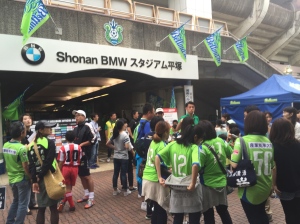 This game kicked off at 6pm with Bellmare packing their midfield in a 3-6-1 formation and I really can’t remember too many on-the-pitch details not that these posts ever really resemble anything close to a match report! 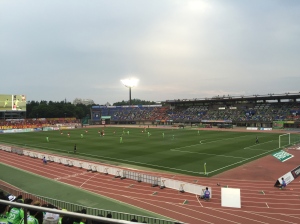 There had only been a few half-chances before Shonan striker Jin Hanato pounced on 41 minutes to open the scoring after the goalkeeper fumbled a long range effort. However, a defensive lapse let in Korean Seung-Hee Lee to level things up 11 minutes after the break. 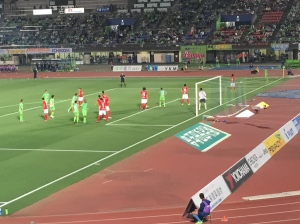 It seemed from then onwards that the game was drifting towards a draw but with ten minutes to go Daisuke Kikuchi volleyed home the winner on the slide to lift the home side off the foot of the table in front of an attendance of 10,147. 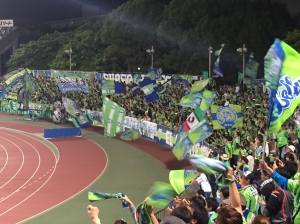 At the final whistle I was expecting another overly long journey home akin to the one after our visit to Kashima the previous month. However, we didn’t have to wait more than a few minutes for a bus and the Shonan Shinjuku line went all the way to Ikebukuro so it wasn’t too bad. It was a very long day but a rewarding one and it felt good to have ticked off yet another J-League ground.

Click on the links below to read about other trips to J-League stadiums in recent times:

A Leicester City fan teaching English in Japan
View all posts by tokyofox →
This entry was posted in Sport and tagged 29 May 2016, grampus eight, j-league game, Shonan Bellmare, Shonan Bellmare 2-1 Nagoya Grampus 2016, Shonan BMW Stadium, things to do in Kanagawa, watch 2 J-League games in one day. Bookmark the permalink.