I Finally Got To See Naomi Osaka Play Tennis But It Didn’t Quite Go To Plan!!

Four time Grand Slam champion Naomi Osaka was back in Tokyo last week to defend the title she won when the Toray Pan Pacific Open (PPO) tournament last took place in 2019. I’ve actually been following the ups and downs of her career since about 2015 but had still never seen her play live until this tournament. I have now seen her play but it didn’t quite pan out as I thought it would! 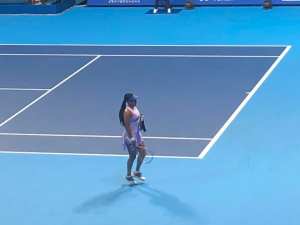 The Toray PPO is a tournament I frequently went to in the last decade but when Osaka did start to appear it was held in the much smaller Arena Tachikawa Tachihi (I couldn’t get tickets) or in the city of Osaka itself. I failed to get tickets for the women’s tennis at the Tokyo 2020 Olympics but subsequently spectators were banned from that showpiece event anyway.

2022 was to be the year I wouldn’t be denied. I booked the first two days off work, and got an advance ticket for the opening day as it was a national holiday. Surely the organisers could make sure she was playing that day to maximise ticket revenue for their biggest asset. Sadly not! I was quite surprised to see the schedule the night before (once the qualifying matches had been decided) and she was not on it. Tuesday it was to be then but I still went on the Monday albeit not for the full day. Likewise for the following day. 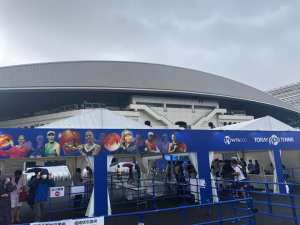 Typhoon #14 Namandol was passing through Japan on those first couple of days and the heavy rain (particularly on day one) meant the roof of the Ariake Colisium in Koto Ward was closed. That may have also accounted for the rather lacklustre attendance but having been to this tournament a few times it was not too surprising to see it so empty.

There is a healthy prize fund available to the winner of this competition but maybe some of that money could be spent on actually promoting the event. Surely the chance to see Japan’s most globally known sports star (and the reigning champion from 2019) in action would appeal to many. So many tennis fans just don’t seem to even know about the Toray PPO! 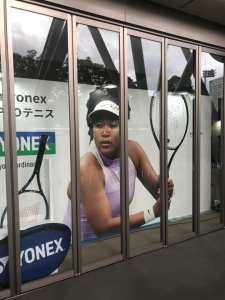 At about 7 pm, Naomi Osaka and Daria Saville of Australia took the court and went through the warm-up. Finally, after two days I was going to see what I really wanted.

Osaka served first and won the opening game. I was loving it but in just the second game at 30-30 Saville went down in pain. Naomi rushed round to the other side of the net to assist in some way as the trainers and doctors came on. It didn’t look too good.

Hushed moments followed as the doctors were unable to fix it for Saville to resume. She retired and Osaka went through to the next round after about five minutes of competitive action. There was still a TV interview on court and the crowd rushed down to get a closer look at the star player who signed a few autographs before waving bye. 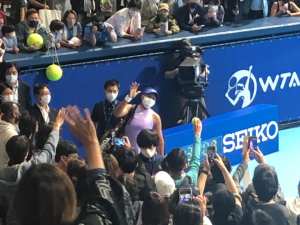 Little did we know then but that would be the last we saw of her at the Toray PPO tournament this year as a couple of days later she she pulled out of her second round match due to abdominal problems. I had been strongly considering going to the quarter finals on Friday if she had made it that far. It wasn’t to be though!

There was of course a few other matches to see including; Qiang Wang vs. Elise Mertens; Xinyu Wang vs. Ellen Perez; Claire Liu vs. Alison Riske; Qinwen Zheng vs.  Misaki Doi; Petra Martic vs. Rina Saigo and Xiaodi You vs. Despina Papamichail. I didn’t bother with the first and final match as six matches is a bit too much for one day. 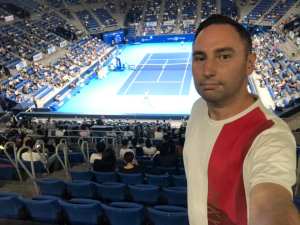 Japan’s Misaki Doi was on next and her appearance generated a bit more attention from the home crowd. I say the word attention as a fair few people just seemed to have their head buried in their smartphones throughout play! Before this match, the atmosphere was fairly flat if non-existant which was certainly not helped by the Covid_19 situation in the country.

Doi put up a brave fight but was sadly defeated 6-2, 6-4 during a match where I decided to watch the action from various vantage points. 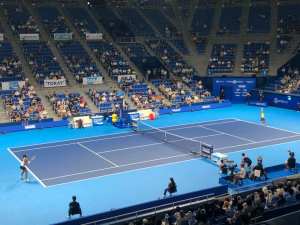 The final match I saw anything of involved another home-grown talent by way of Rina Saigo who had gone through the qualifiers to get that far. Sadly, it was a step too far and she went down 6-1, 6-1.

The following day I just just about caught the end of the 2018 Toray PPO winner Karolina Pliskova’s victory.

There was a Japanese player called Yuki Naito on after that. Much of the first set was neck and neck but her Brazilian opponent Haddad Maia eventually got the upper hand before going on to win in straight sets.

Naomi Osaka’s match followed and that was it for my double dose of live tennis at Ariake Colisium. It didn’t go exactly as I’d hoped but I still enjoyed it, and technically I did get to see my favourite current tennis player in action. Maybe the anecdote I now have of having seen her play for just a few minutes is better than watching her coast to victory in the early rounds of such a tournament!

Click on the links below to read about previous tournaments:

Click here to read ‘The Complete Tour Of Katakana-Named Stations In Tokyo!’