Never thought I would go back to Kamakura after my first visit in the summer of 2004 with my sisters. Not because I thought it was bad but just because I didn’t think I would feel like returning. However, when a student asked me if I wanted to go with her I thought why not. Arriving in Kita Kamakura on Sunday luchtime we started at Engakuji Temple.

We didn’t want to get templed out (there are about 70 in total) and we certainly didn’t do that as we only went to the aforementioned place as well as Kotoku-in Temple which is famous for its 13.35 metres tall Great Buddha. 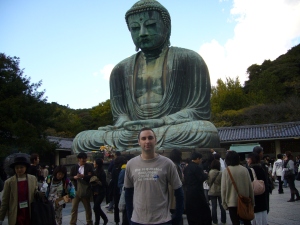 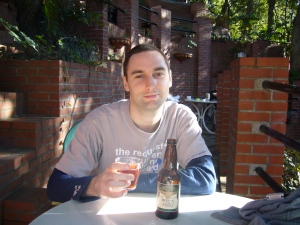 Instead we spent most of the afternoon taking one of the hiking trails for anhour or so amid the greenery which lies between the two. We did stop en-route though at a cafe set in the woods where I fell sucker for some rather expensive Kamakura brewed beer. The marketing mans dream I certainly am! If I am being cynical it was probably just a cheap dark beer with a fancy Kamakura label on it!

It was nice to have the mid-afternoon sun shining on us as we followed a trail which was occasionally steep before we encountered the crowds at our destination. Having visited the Great Buddha before as well as other notable ones in Nara and Hong Kong there wasn’t too much excitement when we got there and like many many others i spent more time looking away from the bronze statue in the name of getting my photos taken in its foreground.