I went to Borneo to see Orang-Utans and to experience the jungle along the 560 km long Kinabatangan river which I did via a shoestring safari three days two nights tour. A six hour bus journey to Kota Kinabatangan and a further bumpy ride to our lodge saw me and my fellow travellers get started late afternoon on a two hour river cruise. We saw proboscis monkeys, macaques, crocodiles and most importantly the Orang-Utan although the three that I saw were a bit of a blob in the distance and not so noticeable in my photos.

Later that night I did a night trek in the wilderness of the jungle to spot nocturnal animals though nothing too exciting in my opinion though that may have been because I just didn’t see them as my little torch ran out of batteries early on. Believe me, it is complete darkness when all the flashlights are switched off. The following nights trek was better and I even got to hold a scorpion which actually came before I was attacked by a leech or two. 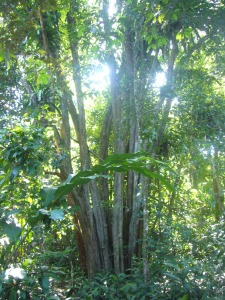 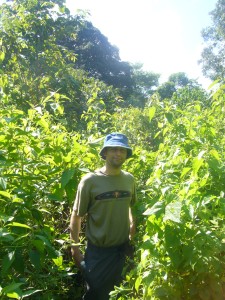 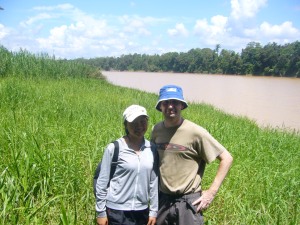 I got up at 5.30am on both days to do a morning river cruise which was better on the second day when we saw a huge crocodile and the usual hordes of long tailed and proboscis monkeys. The second day also involved a three hour return walk through the muddy jungle to Oxbow Lake, kayaking on the river and getting up close with a Kingfisher or two (and the ubiquitous monkeys of course!) on the afternoon cruise.

As much as I enjoyed the tour and the people on it I couldn’t help but feel a little disappointed that I didn’t see more wildlife. I left the lodge at 8.30am last Sunday to get a bus back to Kota Kinabalu for my evening flight back to Tokyo and that should have been the end of my trip………….but was it??!!!! 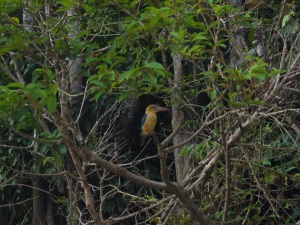 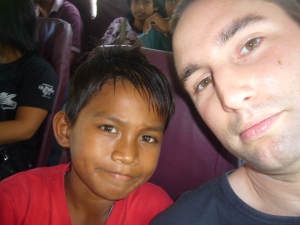 A Leicester City fan teaching English in Japan
View all posts by tokyofox →
This entry was posted in Asia Travel and tagged Borneo, Kinabatangan river. Bookmark the permalink.