Our little minibus left Vang Vieng on Wednesday 13th August at 9am and took us on an ever winding and climbing road up through beautiful mountains, valleys and local villages for seven hours. Luang Prabang is a small town located between two rivers of which one is the famous Mekong. The other one had flooded a lot of the road due to the rainfall which happened in periods every day of my trip. Wasting no time on our arrival we walked around the town taking in the night market, some street bars and That Chomsi (temple) situated at the top of town looking over the the surrounding area which had some fine views. 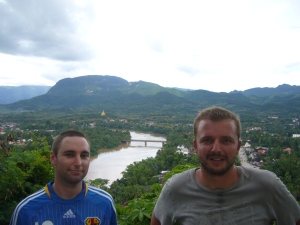 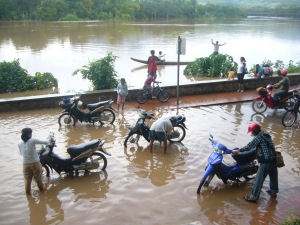 My final full day was taken up with an elephant trip which started with elephant riding for about 90 minutes which was way longer than I did in Thailand a few months ago. I was most looking forward to the elephant bathing but images of these huge animals spraying you with their trunks never came true although Mizuki’s elephant made a big enough splash to slightly compensate for the rest of it which was basically just riding an elephant into water which is still an experience in itself and good fun all the same. Mine was a bit of a rebel with no sense of direction even though they must do the same sh*t day in day out for the walking wallets known as tourists. 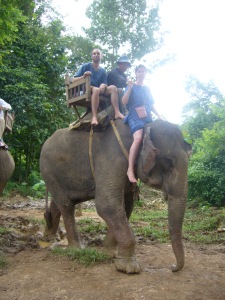 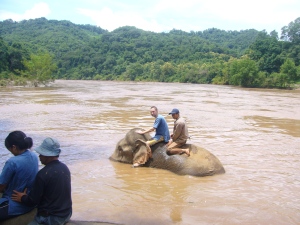 Tat Sae waterfall was the final port of call and it didn’t stop pi*sing it down while we were there but these were really beautifully layered falls and powerful too as I tried to make my way under them. A lovely boardwalk to the side of the falls and through the jungle basically rounded off both the day trip and my time in Laos. 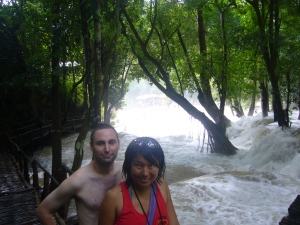 On my final morning we all got up to see the ‘morning alms giving ceremony’ but despite being on the streets by 6am we only caught the end of the monks forming a procession through the town which they do every morning with the locals offering food and payng them respect. Just as I was about to go the Airport later that day (15/8/08) I finally met ex-colleague Bridget by chance having tried and seemingly failed to meet up with her on the previous couple of nights.