All four of my nights in Italy were spent in the capital city staying at Fawlty Towers which was not just chosen for the name, but also for its price and convenience to the main station Termini. Despite the kicking it gets on the internet, I found it was fairly decent but maybe I’m more used to slumming it than others when on holiday!

I spent two whole days in Rome and it’s hard not to like such a place although the people at times did their best to make it so with their attitude, rudeness and incessant arguing. I started by getting in line for the Sistine Chapel and the Vatican Museums (below) which I guess is a must-see, and of course its unbelievable to see though its not really my thing. You can’t not appreciate the work and effort gone into such a thing.

The following sights, which I visited over the two days, all featured in the 1953 film ‘Roman Holiday‘:

St Peter’s Basilica (below) from the outside was really impressive and featured in the films opening title sequence. I returned at the end of my second day to go inside and climb the 500+ steps to the top. 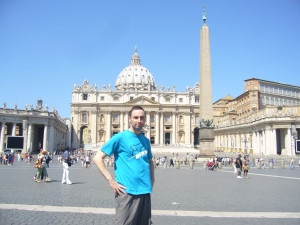 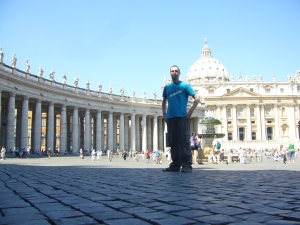 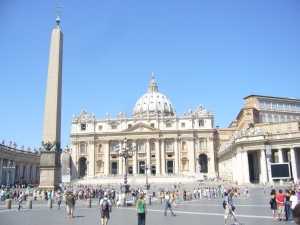 Ponte Sant Angelo is the bridge (below) where the barge dance scene took place below with the castle towering above.

Spanish Steps (below) were where she sat eating gelato (something I couldn’t do due to a case of sensitive teeth) when Joe Bradley (a.k.a. Gregory Peck) “accidentally” bumped into her.

51 Via Margutta was the address where Joe lived (below) but sadly its under construction and bore no resemblance to that in the film which is probably not so surprising as the film was made over 50 years ago!! 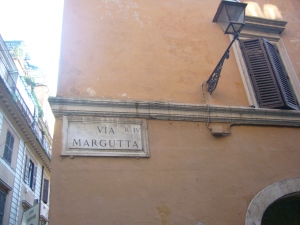 Fontana di Trevi (below) was where Joe tried to steal a kids camera while Ann (a.k.a. Audrey Hepburn) was getting her hair cut nearby. Like Spanish steps this was a tourist magnet but a great place to just sit and watch people which is what I did a lot more of on my second day when I returned to both places. 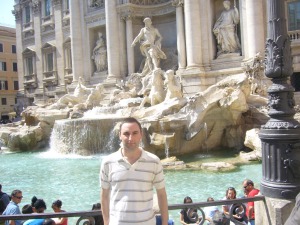 Bocca della Verita (below) probably provided the films most memorable scene where Joe pulled his hand out of the ‘mouth of truth’ with his hand up his sleeve astonishing Ann. Having seen the huge line for this photo opportunity the previous day it was a relief to be almost first in the queue when I returned on my second day.

Piazza Venezia provided the location for the dangerous Vespa riding scene below.

Roman Forum (below) was where they met when she was sleeping on a stone and this was one of my favourite parts of Rome as I really enjoyed looking around the ruins here and in the neighbouring Palatine.

The Collosseum (below) is visited by almost everyone including myself and of course Joe and Ann in ‘Roman Holiday’. Another fascinating place to visit and the symbol of Rome for good reason.

Pantheon (below) was really nice too and looking up at the glass bubble roof must be an amazing sight when it p*sses it down. Very sunny when I was there though. Joe bought Ann champagne at a nearby cafe. I was looking for a cafe to sit at and watch people when I was here but they were all quite expensive and I resisted the temptation to sit outside McDonalds which has a fantastic location right in front of the columns of the Pantheon. 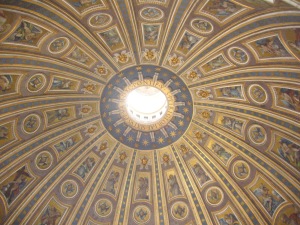 Instead I went to the nearby Piazza Navona (below) where just round the corner I had a breakfast beer but for good reason as I saw Duff beer on sale which is a famous beer drunk by Homer in ‘The Simpsons‘. The piazza was fairly quiet when I arrived but when I returned after a 10 minute detour it was packed with tourists.

Piazza Barberini was the square (below) where Ann broke out from her palace….I think! 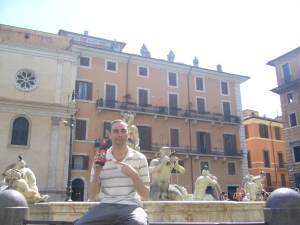 Overall, I did a lot of walking around Rome over the two days. I could have left Rome fairly content after a busy first day but it was quite nice to to be able to spend my time more leisurely on the other day.

Piazza del Popolo (below) finally gave me the chance to wine and dine in a nice location with a cheap pizza and a chance to impersonate James Richardson reviewing the Italian sports papers as he did with regularity at cafes on Gazzetta Football Italia on Channel 4 in the early 1990’s.