Bowing Out Of Tokiwadai School

I finally left Tokiwadai school last month after 4.5 years which was not something I wanted and was a very sad moment for both me and my students. The reason for the change was that this school as well as a couple more near where I live became part of a different district recently and the bosses didn’t want any of us to be working in two districts. More ridiculous is that this school is right near where I live and in easy walking distance which was a huge bonus as the early starts on Saturday mornings meant it was very convenient for me.

Now I have to go to Gotanda which is about an hour away door to door and only time will tell if I can get used to doing that week in week out. I met many great people in Tokiwadai school over the years but there are five people who stand out above the others who I want to mention here.

Starting with the adults, Hiroko and Masafusa have been my private students since day one and have been incredibly kind and generous to me with regular gifts and dinner dates. In the lesson they have shown me probably far more respect than I ever deserve and have always been up for the additional resource materials which I have regularly used and/or tested out on them.

Saying goodbye to them was difficult but not as hard as saying bye to the three young girls I have been teaching for a couple of years. While its easy for me to stay in touch with adults the same obviously can’t be said of the kids. Saki and Misaki have kicked off my Saturday’s in fine style and they were a great pair, possibly my favourite students, who were a real pleasure to teach and their progress was amazing. They were always really energetic and worked so well together and got into all of my games and activities without any complaint. 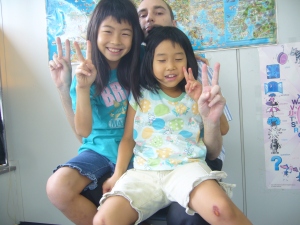 My final mention goes to Hiiragi who must be one of the most mature 8 year olds out there. She was a private kid student and also a joy to teach as she just soaked up all the new vocabulary and grammar with such relative ease. On top of that she really respected me and her farewell card to me was beyond belief for someone of that age. I couldn’t have penned such thoughtful, emotional words when I was twice her age!

My girlfriend even cried when she read her and her mum’s letters to me. The latter even thanked me for influencing her daughter with my musical and football tastes based on the music I used in the lessons and mentioning Leicester City once or twice. Or maybe it was because I bought her the Match of the Day annual last Christmas as it featured her favourite player Peter Crouch (no idea why that is so) and after showing her the Gary Lineker/Leicester City page I was so proud when she had a Foxes badge on her mobile phone wallpaper the following week. 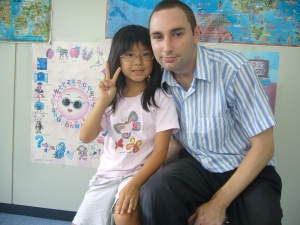 A Leicester City fan teaching English in Japan
View all posts by tokyofox →
This entry was posted in English Teaching. Bookmark the permalink.

4 Responses to Bowing Out Of Tokiwadai School