I don’t have to do any Halloween stuff in my lessons (and I don’t think many other teachers bother with it) but in order to raise my motivation I decided to do something this year for the adults as well as the kids.

Despite growing in popularity in Japan over the last decade or two, the events of October 31st are still not that interesting to talk about for students (or indeed me) so I decided to use a very famous song to add a bit of Halloween flavour to the lessons.

As the title suggests I used ‘Thriller‘ by Michael Jackson which everyone is aware of but knowing a few words from the chorus was about all I knew despite having heard the song for 25 years! With that in mind I knew it would be difficult for the students but given the limited choice of vaguely Halloween-themed songs available I thought it best to stick with it. That and the fact that I saw it as an opportunity to jump on the bandwagon that has rolled on ever since his death this Summer.

I managed to use it in lessons for all levels with the higher levels doing jigsaw listening (students work together and put the cut-up lyrical strips together) and the lower levels doing a gap-fill exercise of about a dozen words which were randomly boarded for some of the weaker ones to choose. Sounds easy but its not as his voice is not as clear as other singers.

All in all it was a good way to get a bit of Jacko into lessons which I had the idea for immediately after hearing news of his death and that plan was finally realised in the last week which the students seemed to enjoy even if most of them had no idea of the songs meaning. 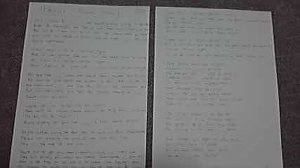