So due to the Eurostar problems I was back home a day earlier than planned and I didn’t really do anything of any note until Christmas eve when I went out to the usual pub in town for a fair few beers and sambucas which was better than last years night out.

My sister and her husband were home for Christmas day which was nice although it did mean I had to give up my bed for them and they also did what I have always done by delaying the present opening part of the day due to their long lie-in. Insomnia meant I was awake at a stupidly early hour.

Boxing day included the customary fernie hunt in Great Bowden which was toned down a lot this year due to the ground conditions not being good for the dogs and horses. The spokesperson seemed to assume that just because we were there that we were pro-fox hunting. The usual piss-up in the pub and at the family home of my mate Sam followed that which this year had the bonus of including a Leicester game on Sky TV. We won it as well. 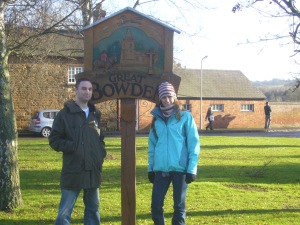 I went down to London on New Years eve to stay with my mate Richard and his wife Mizuki and we went out for a few drinks and joined the masses of people heading to be riverside for the midnight fireworks. From my vantage point I could see about one-tenth of the London eye and basically as soon as it struck midnight we headed off to get the tube home and it was at this moment that it snowed for 10-20 minutes which was like something out of a fairytale or a TV show. 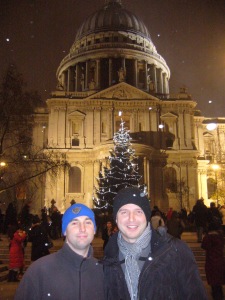 Oh yeah, and there was also a lot of snow while I was back in England.

A Leicester City fan teaching English in Japan
View all posts by tokyofox →
This entry was posted in Family and tagged market harborough. Bookmark the permalink.