A lot of my time in Seville was spent at Plaza de Espana which is a semi-circular open place featuring ceramic tile buildings, a fountain, bridges and a canal.

This place was my first port of call for the main reason that it was used for about 30 seconds in ‘Star Wars Episode II: Attack Of The Clones‘ (2002) when Anakin and Padme followed by R2D2 arrive on Naboo and walk to the Queen’s palace. It was also used in ‘Lawrence of Arabia‘ and played the part of ‘Cairo’ officers’ club.

CGI was used in the Star Wars film to add domes, modify buildings, alter towers and mirror the whole place to create an oval. 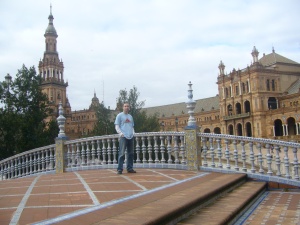 First impressions as I entered the site were of disappointment that parts of it were like a building site which often seems to be the case when visiting tourist hotspots. They are seemingly always under construction! Thankfully, that was only near the entrance and although the canal was dirty it wasn’t really noticeable as I wandered round the place.

Although it was a bit run-down and decrepit in parts it really was a beautiful place and I am quite surprised that it features so little in the guidebooks on Seville. There were basically only three parts of the plaza used by the Star Wars film crew (only two made the final edit – all three can be seen in the first couple of minutes of this video) and they included the fountain, one of the bridges and the undercover rim of the plaza. Having used my R2D2 figure in Tunisia I couldn’t resist the idea of using it in a few photo’s at the Plaza. What luck that I just happened to have it in my bag!! 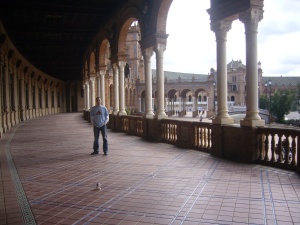