Last weekend saw Manchester United win the League Cup which incredibly means that its ten years since Leicester became the first Wembley cup winners of the 21st century. That win for us in the final (ensuring European qualification) followed by the 5-2 crushing of Sunderland had us City supporters believing that we were to become one of the Premier League’s top teams.

What happened after that was a downward spiral which saw that great team ripped apart followed by relegation, administration (albeit in a promotion season), relegation, a few years of keeping our heads above water and then relegation to the unchartered waters of third tier.

When the latter happened in May 2008 we thought the worst but maybe it was a blessing in disguise as the club appointed Nigel Pearson, which didn’t exactly capture the imagination of the fans. However, we bounced back at the first attempt with him at the helm and are currently looking odds-on for a Play-Off spot which would give us the opportunity of taking our place back in the top flight. We may not be ready for the big stage just yet but I am a believer that its better to do it ASAP rather than staying in the Championship for a few seasons like some people would seemingly prefer. 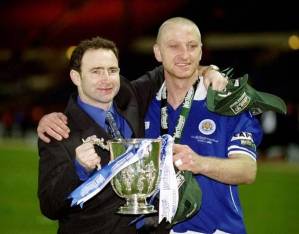 A Leicester City fan teaching English in Japan
View all posts by tokyofox →
This entry was posted in Leicester City, Sport. Bookmark the permalink.