Where I work in Shibuya has a short walkway area leading to the lift which takes people up to the school on the fourth floor. This area is undercover and protected from the wind and rain. With the majority of Japanese males seemingly smokers it was quite an ordeal to get to the lift through all the smoke created by the salarymen standing around there. As an anti-smoker I hated this and it certainly wasn’t good for the students, particularly the young kids, who had to walk through the thick blanket of smoke. 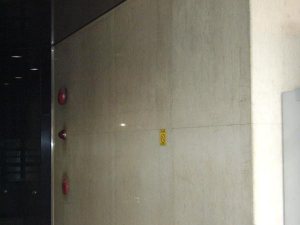 However, that all changed with a little bit of help from yours truly. Sometime last year I put up a small, but bright yellow, no-smoking sign on the wall to see what happened. Perhaps surprisingly it was still in tact a few days later when I returned to the school and its still there now many months later. Its only stuck to the wall by a small bit of blu-tac and would undoubtedly have been taken down by someone in most other countries but amazingly that hasn’t happened in Shibuya where it has actually been obeyed by the smokers. Obviously, it would be false to say that I played a major part in this (the building manager leaving the sign up and moving the smoking ash-try bin thing outside was a far major role) but a part I did play and its nice to know that I got the ball rolling…….maybe!

A Leicester City fan teaching English in Japan
View all posts by tokyofox →
This entry was posted in English Teaching, Japan Life. Bookmark the permalink.