A Banana Vending Machine In Tokyo! You Better Believe It!

There’s no doubt that Japan is the land of vending machines. Among a population of 120 million it is said that there is one vending machine for every 20 or so people which equals erm……a lot of machines!

Now, the ‘Dole’ banana company have started selling their products in a vending machine which I came across in one of the far-flung parts of the huge Shibuya station. Wondering what might happen to them when they fell I put my hand in to see that their was a foam landing mat to stop them becoming instantly bruised. Individual ones can be bought for 130 yen (about a pound) or you can get a bunch for 390 yen.

While on the subject of banana’s, today is unofficially banana day in Japan as ba(8) plus nana (7) are the month and day respectively. 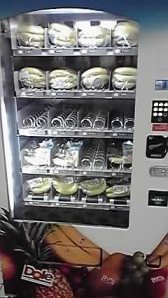 3 Responses to A Banana Vending Machine In Tokyo! You Better Believe It!