It’s been said that some 500 movies have been made in Venice but most of us can probably only name a few at best. In ‘Euro Trip 2010 Pt X‘ I referred to locations used in ‘The English Patient‘ (1996), ‘Indiana Jones & The Last Crusade‘ (1989) and ‘Death In Venice‘ (1971)and on top of that two James Bond films have been set there; ‘Moonraker‘ (1979) and ‘Casino Royale‘ (2006). The latter may be a way better film but it’s the former which is actually more memorable as it included Roger Moore’s 007 famously transforming his gondola into a land vehicle (below) which rode through St Marks Square.

This was to the astonishment of many including a pigeon doing a double-take which was rather cheesy and typical of the Moore-as-Bond era. This is the very same pigeon (below) which was shown in slow-motion looking one way and then looking the other in disbelief at Bonds antics. *

Coming from the water you carry on straight down through the piazza (below) as Moore did in unorthodox fashion.

Directly in front of you on the north side is the Torre dell’Orologio (below); the clock tower where Bond has a bit of a tussle with one of the henchman working for the films antagonist Hugo Drax. Not surprisingly the interior wasn’t behind the real clock but in the studio.

Just a few metres east of here is the Venini glass store (below) where the entrance was used as Drax’s Glassworks shop. 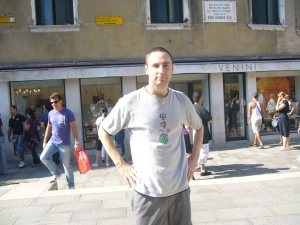 Ca’Rezzonico (Museo del Settecento Veneziano) is located quite near to the church used in ‘Indiana Jones & The Last Crusade‘ in the Dorsoduro district. This doubled up as Drax’s laboratory in ‘Moonraker‘ where Bond followed Dr Holly Goodhead (although he didn’t know it was her at the time) as she mysteriously crept away from a group having a tour of the museum and went up some stairs. The actual real glassworks museum is on Murano island just north of central Venice and I had planned to go there but in the end I just didn’t have the energy to venture out that way.

Just round the corner from St Mark’s Square is the Hotel Danieli (below) which was where Dr Goodhead stayed in ‘Moonraker.’  The interior was also the inspiration for the tiny studio-built sinking palazzo used at the end of ‘Casino Royale‘ which can be seen on the DVD extras. 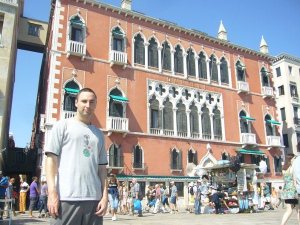 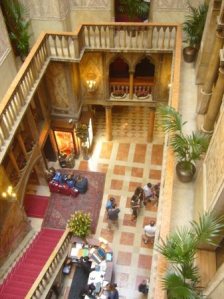 St Nicolo riviera (below) on Lido was also used in some way in ‘Moonraker‘ but when I got there I couldn’t for the life of me remember what it was!! I have since discovered it was a monastery faking it as a “Brazilian” training camp so nothing too important.

Ponte dei Sospiri more commonly known in English as ‘Bridge of Sighs’ (below) was a little disappointing in reality as it was surrounded by blue advertising boards while its presumably under renovation. It featured in all its splendour at the end of ‘From Russia With Love‘ (1963) but was clearly just rear projection and Sean Connery’s 007 and Tatiana Romanova were in the studio. For your information the bridge connects the Palace and the prison and was named for the condemned prisoners who sighed when they crossed it to meet their executioners.

My Venice guide through the eyes of 007 ends with some ‘Casino Royale‘ scenes. Bond and Vesper ride their yacht into Venice going between the bridges of Accademia and Rialto on the Grand Canal (below) although the sinking palazzo near the latter was a one-third reconstruction on the Pinewood 007 stage in the UK. 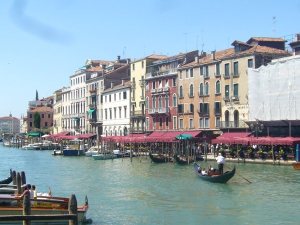 Before all of that we see Bond supposedly looking out from his hotel balcony over St Mark’s Square but that view would not be even be possible. He runs across the square on hearing the news that there is a problem with the transfer of the money. I think its the Santa Maria della Salute which appears in the background (though I can’t seem to find a photo of this in my collection) of Daniel Craig’s 007 as he talks to ‘M’ about Vesper’s betrayal from his yacht and then its off to the Villa La Gaeta in Como for the films climax and those filming locations can be seen here.