I was lucky to escape a fine on the train between Verona and Venice. I bought a ticket two minutes before it left and made a dash for the train but stupid rules in Italy say you have to validate the ticket. Thankfully, the conductor was of the understanding kind. On my arrival in Venice at 11am I eventually found Archies House which was a dirty rundown hostel but at 20 euros a night I certainly didn’t care about that! As had become the norm I headed out straight away as I was on a tight schedule. Yet again the gods were smiling down on me as it was another glorious day. 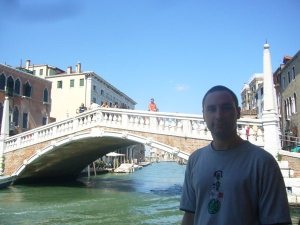 Venice was a stunning place but its maze of alleys, canals and bridges left me exhausted by the end of the day. Only three bridges cross the grand canal though and walking between a couple of them seemed to take an eternity as I lost my way walking through the San Polo district having started at Scalzi Bridge by the train station. The view from Rialto Bridge (above) was absolutely beautiful and typical of what I had imagined. 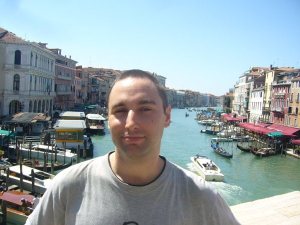 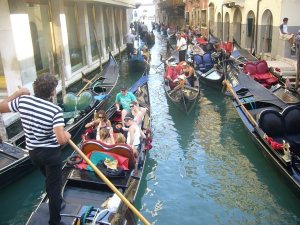 From there I decided to take a break from the streets for a while and so got on one of the over-priced vaporetto’s (small passenger ferry) and headed for the island of Lido. While it was certainly no gondola it was nice to get on the water albeit on a very crowded method of transport. Gondolas (above) are really expensive by the way and as I wasn’t with my girlfriend there really was no reason to fork out 80 euro’s or so for a 30 minute ride.

Lido was nice enough but it didn’t exactly get my pulse racing. I walked over to the other side of the island which is home to an overly-popular beach (below) and across the road from there was Grand Hotel des Bains (below) which appeared in both ‘Death in Venice’ and as the ‘Cairo’ hotel in ‘The English Patient’. However, I was not so happy to see that the place had closed down. I have since discovered in this article that it will reopen as a luxury apartment complex but that is no consolation for some cinephiles.

I took a ferry back to the main area (without paying this time!) and headed for the picturesque St Mark’s square (below) in the San Marco district which was really impressive even amidst the hordes of pigeons and fellow tourists. I was happy enough just to admire the views and really had no interest in joining the queue of people lining up to get in to the basilica. 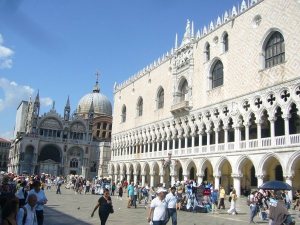 I later walked on towards Accademia Bridge and crossed it which took me into the much quieter Dorsoduro district. I had lost my way again and was starting to really feel tired (which is quite rare for me when travelling) when I came across Chiesa di San Barnaba which would normally be considered to be a fairly ordinary church if it wasn’t for the fact that it was seen in ‘Indiana Jones & The Last Crusade’. Indy, along with a couple of others, walk across the bridge seen below and then enter the church which is a library in the film. I didn’t go inside as it was expensive. Indy did of course and he found an important clue relating to the numeral ‘X’ marking the spot. Well, what do do you know but this is part X of my trip!

I spent the night sleeping with a Japanese guy. Yes, you heard that correctly! My dorm room included three single beds and I was in it with two Japanese guys of which one had taken the bed by the window leaving his mate with one of the two beds in the middle of the room. I was last to check in so of course had to take the bed which was next to his and when I say next to his I mean about an inch apart which funnily enough is as close as my girlfriends bed and mine were when we went to Malaysia in July!