It’s getting more difficult to think of something original to do at Halloween in my classes. Last year I made a load of new Halloween flashcards and used Michael Jackson’s ‘Thriller’ in a variety of different ways to help the students along with their English whilst (hopefully) creating an enjoyable atmosphere.

To be honest I wasn’t really gonna top that as it was only a few months on from Jackson’s death and so listening to one of his songs as a gap-fill or jigsaw listening was hot stuff. For adults I mostly just recycled that idea but I did also introduce the ‘Ghostbusters’ theme from Ray Parker Jnr. which, whilst no piece of cake, was a bit easier than ‘Thriller‘ especially when I gave some students the missing words albeit in the wrong order. Listening to this classic in turn led to a discussion on either the film, if they believe in ghosts or whether they had seen one and usually me teaching them the word sceptical which is what I am although I do like watching all that kind of nonsense.

I also managed to use my Simpson’s Horror Edition Halloween Top Trump cards a few times in the name of comparatives (e.g. Devil Ned is more evil than Zombie Skinner). As for the kids it was pretty much the same sh*t different year although I did come up with the idea of incorporating yet more Star Wars stuff into a lesson by making a Darth Vader mask.

Now, I know my Mum will at this point will be muttering something like “Well I still don’t understand what Star Wars has to do with Halloween!” but this annual festivity is about all things spooky and evil and very much includes science-fiction characters these days. The whole idea was not too dis-similar to that of Star Wars Celebration Japan in 2008 which included ‘The Vader Project’ which was where many different people and artists had come up with their own variations of the iconic Vader helmet. 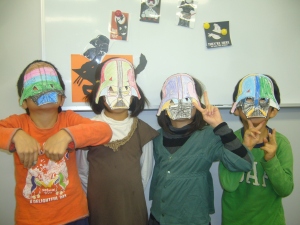 7 Responses to A Spook-tacular Halloween (2010)