Toho Studio’s in Seijogakuenmae (on the Odakyu line) is Japan’s largest and most famous film studios and is famous for making TV programmes and films such as the Seven Samurai (one of the greatest and most influential Japanese films ever and the inspiration for the Magnificent Seven) and Godzilla and its many dreadful sequels. As I had a free afternoon last Friday I thought I would go and see the place to find out a little bit more about it and see what I could discover.

The studio’s aren’t exactly easy to find as they don’t feature on any maps in and around the station. I only had a postcode (157-8561) to go on and my instincts and when I did stumble upon it in Seijo 1-chome my expectations were pretty low in terms of being able to go in and have a nose about the place or even a tour. I anticpated pretty much nothing and that is exactly what I got!! Instead I had to just settle for a couple of photo’s outside the place which in some sad way I was content with as I had been very close to giving up on finding the place on a couple of occasions. 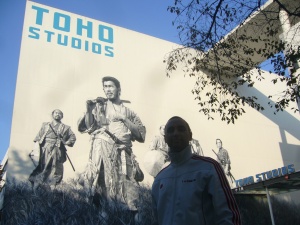 A Leicester City fan teaching English in Japan
View all posts by tokyofox →
This entry was posted in Films, Japan Filming Locations, Movie Locations and tagged godzilla, how to get to toho studios tokyo, seven samurai, toho studios. Bookmark the permalink.

17 Responses to Trip To Toho Studios