The Japanese have a bit of a reputation for their ‘click and tick’ method of sightseeing on package tour holidays around the world. Now I’m also no stranger to this kind of travelling as proved by my trips to Asia, Europe and Africa in recent years. Always on the look out for the next cycling assignment I came up with the idea of cycling around all 25 of the sights mentioned in ‘Fodor’s Tokyo Top 25’ guide with a couple of extra ones thrown in for good measure. As with my previous cycling adventures the idea was to just get in there, take my photo and then get out!

Remember, remember the 5th of November! That’s the day when I leave my place in the north of Tokyo at 6.15am in order to maximise daylight. Within 25 minutes I am at Rikugien Gardens in Komagome. Needless to say, its closed but that makes getting my photo outside easier and less embarassing. Likewise just after 7am in Ueno Park where I go to get my snaps of the Tokyo National Museum and the National Museum Of Western Art.

After three closed places its not exactly been the most fascinating insight into Tokyo life but the next place is a big one in the way of Asakusa Senso-ji. I’m quite surprised to reach the place from behind and its open but fairly empty as I take my bike through the place and get my picture in front of the main temple when beforehand I thought I’d just have to settle for the main gate at the other end of the shopping street which one starts from when arriving by train or boat. I get that one too but as I take it my legs are shaking so much. The reason is that only moments before I had a crash. I was cycling down the path that runs parallel to the usually busy and over-crowded shopping street. I had the right of way but suddenly a young-ish Japanese guy shot across in front of me. In true Japanese fashion he didn’t anticipate any danger and I couldn’t quite brake in time. We collided and both fell off. I was thankfully fine and so was my bike. I asked him if he was OK (he didn’t bother to ask me and neither did he say anything) and then told him to use his eyes in future. No hard feelings but I hope he suffered some damage! 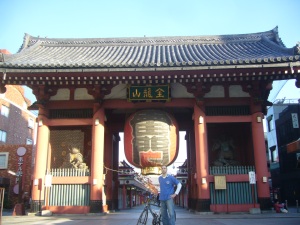 By 8am I am on the other side of the Sumida gawa river at the Edo-Tokyo Museum which I have visited in the past but I don’t recognise it on arrival and I cycle round the place twice looking for a good photo stop but I can’t find one due to the surrounding buildings getting in the way. I settle for one of the museums backside taken from the car-park. 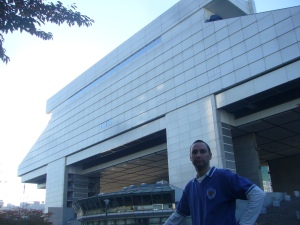 The Imperial Palace in the heart of Tokyo is next but getting there is no picnic and I end up near Ginza so have to backtrack a bit (but not for the last time!). I’m aware that you can’t take bicycles near the grounds of the Palace but I think I’ll risk it and see what happens as I want to get my bicycle in most, if not all the photos which, like a kid, I still feel I need to prove that it is all valid. I’m wheeling my bike quite near to the photo spot and put it up against the short fence and am hopeful of getting my tripod and camera set up for a quick shot when I hear the inevitable shouting from the guard. I say OK and ignore him. I go to take my photo and he shouts again and then some more. I get angry and say that I understand but I’m going to take my photo first and then leave. In true Japanese style theres no room for slight deviation from the rules and he keeps shouting on at me as if I am a terrorist or something. He even says the solitary word ‘bicycle’ in English as if I haven’t understood him moments before and had a short Japanese conversation with him……..albeit in slanging terms! I relent and walk my bike away and return a minute later on my own and take a photo.

I go to the National Diet Building next and its fairly non-eventful as is the Yasakuni Shrine apart from a bit of effort in getting there and catching the skin of my hand whilst folding away my tripod. Luckily, its just a minor war wound to remember this trip by. The National Museum of Modern Art is completely new to me and so it takes me a while to locate even though its nearby. I then pass by the Imperial Palace East Gardens entrance and get a picture of this as technically this is what is listed in the Top 25 book. Its around 10am when I reach Hibiya Park which is also in the vicinity and I even treat myself to a toilet stop, a bit of breakfast and a very short break. 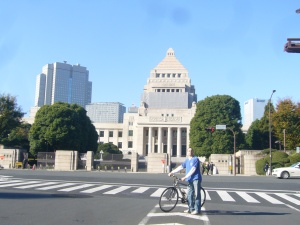 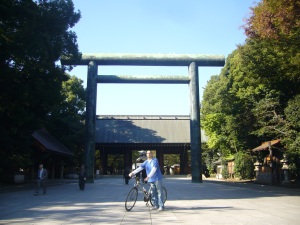 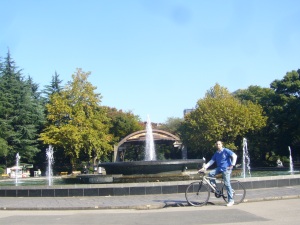