One of my favourite bands the Manic Street Preachers were in Tokyo last night playing live at Studio Coast in Shin Kiba and I was there to witness it. I have seen the Welsh trio play live a few times in the past but always as festival headliners or as support to Oasis so this was the first time to see them at their own gig.

While I like many bands I’d say that none of them come close to meaning as much to me as this band. When they burst onto the scene in the early 1990’s I took note of them and liked their songs but it wasn’t until their second album in 1993 that I became a big fan of their music.

I loved the passion and emotion in lead singer James Dean Bradfield’s voice and the lyrics were very interesting, particularly around the ‘Holy Bible’ era of 1994, although squeezing extra syllables into the lyrics is something that has always grated with me slightly. He even managed to fit two extra words (“Tokyo Bay”) into one of the songs last night which I think bypassed most of the audience.

Usually when I know I’m going to see a band play live I listen to them loads beforehand to get me in the mood but I feel this, can in a way, reduce one’s enjoyment of it as you’ve had overkill of the tunes. With that in mind, I didn’t listen to any of the Manics’ extensive back catalogue before their Tokyo performance although I did listen to their new album ‘Postcards From A Young Man’ which they were in town to promote. 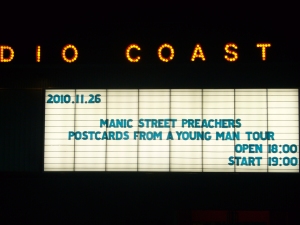 Outside the place a short, pretty lady came up to me and it took me a few embarrassing moments before I realised that it was the mum of a young girl I used to teach in Tokiwadai. Having exchanged Manic’s songs with her in the past I should really have anticipated that she might be there.

I didn’t know it beforehand but Carl Barat (ex-Libertines frontman) was the support act and to be honest this news didn’t excite me too much but I actually enjoyed his seven-song set which finished with a Libertines song by way of ‘Don’t look back into the sun’ which went down very well with the crowd.

The Manic’s then came on and burst through a 21-song set featuring tracks from every one of their many albums. Inevitably there were many of the usual crowd-pleasers although it was interesting to see that certain songs are way more popular in Japan than they are back in Britain. ‘You stole the sun from my heart’ is a reasonably ok song but it went down a storm with the Japanese crowd who I have to say were a much better and less passive crowd than I have seen at shows in the past. 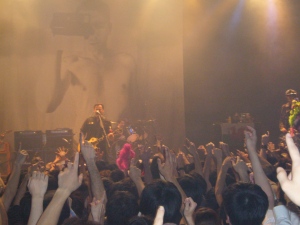 Not sure that anyone else understood the Top of the Pops reference which James made regarding ‘Suicide is painless’ which was their third performance on the ex-BBC show. Nicky Wire even referred a couple of times to ex-guitarist Richey who mysteriously disappeared over 15 years ago. Along with the hits, the band played a handful of tracks from the new album (but surprisingly didn’t play the actual title track!) as well as a few from the past which I certainly wasn’t expecting to hear. Overall, I really enjoyed seeing them play in what for me was the most intimate venue I’ve seen them in. The crowd were fine too; not overly crazy and more importantly not so quiet in-between songs.

Setlist: You Love Us; Your Love Alone Is Not Enough; Motorcycle Emptiness; (It’s Not War) Just The End Of Love; Jackie Collins Existential Question Time; Roses In The Hospital; This Is Yesterday; Everything Must Go; Some Kind Of Nothingness; Suicide Is Painless; You Stole The Sun From My Heart; Ocean Spray; La Tristessa Durera (Scream To A Sigh); Motown Junk; If You Tolerate This Your Children Will Be Next; Stay Beautiful (Acoustic); Faster; No Surface All Feeling; Golden Platitudes; Tsunami; A Design For Life.