On the 23rd December I was back in England and in the capital itself so I decided to go on the underground to Watford station (at the end of the Metropolitan line) with the idea of walking from there to Whippendell Wood. The roads were very icey though and difficult to walk on plus I lost my sense of direction so just took a taxi to the area which was used as the Naboo forest in ‘Star Wars Episode I: The Phantom Menace‘ (1999).

Due to the recent heavy bout of snowfall that had pretty much brought the country to a standstill (yet again!) the place was more reminiscent of the remote ice-world of Hoth. Having entered the wood through the Grove Mill Lane Car Park I came to the sign shown in the picture above on the right. From here there are three paths and I took the one on the right for about two minutes whereby I came to the first shot which is recognisable by a huge drop and an interesting mark on one of the trees which is where Qui-Gon Jinn and Obi-Wan Kenobi save Jar Jar Binks who in return agrees to guide them to Otoh Gunga.

To get there they travel underwater which involved the use of CGI to add water to a wood which has no swamps or lakes. This part of the wood was nearby but it was like trying to find a needle in the proverbial haystack so I gave up and settled on some easier to find locations. Going back through the car park and over the country lane I then arrived at what looked like a golf course where a few scenes were filmed and these were far easier to locate. In fact they were all in one place but just shot from slightly different angles. This is where Amidala and the rebels make plans to attack the city of Theed (the capital of Naboo) towards the end of the film. 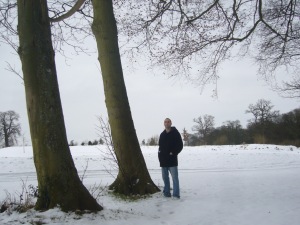 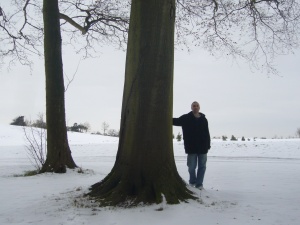 I then headed back to the station on foot this time thanks to some directions by locals. It took about 40 minutes in the snow. I’d been meaning to do these locations for a couple of years and was fairly satisfied with my mornings work but maybe I will return one day when I am next back in England. Though the snow added a bit of festive beauty to the area I would still like to see it in its more normal setting but I can’t say its gonna be too much of a priority.