Belgium 2011: Sprout & About In Brussels

I arrived on Belgian soil for the first time in my life after a ridiculously early flight which left Berlin at 7:10 am. With an evening seat booked on the Eurostar back to London I didn’t have too much time to waste and was happy that I could get a return ticket to Bruges at the airport. To be honest, there wasn’t too much I wanted to see or do in Brussels.

I thought it best to do what I had to do in the capital before Bruges rather than after it when it would probably be dark. First stop had to be the Mannekin Pis; a tiny 61cm high bronze fountain sculpture which was fairly desolate when I arrived but within a couple of minutes a sizeable crowd had gathered round. 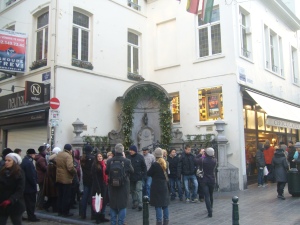 I then walked on to the UNESCO World Heritage site Grand Place where the view was spoiled in my opinion due to the Christmas tree in the middle of the square. Not only that but it had (I assume) been stripped of all its decorations so it was a bit of a blot on the landscape. The architecture was very impressive, especially the Maison du Roi (or Breadhouse) which can be seen in the second picture below. However, given the time of day it wasn’t exactly a thriving and bustling setting.

A Leicester City fan teaching English in Japan
View all posts by tokyofox →
This entry was posted in Euro Travel and tagged Belgium, Brussels, mannekin pis tokyo. Bookmark the permalink.

3 Responses to Belgium 2011: Sprout & About In Brussels