Only a few days ago did I see ‘Harry Potter and the Philosophers Stone‘ (2002) for the first time. I’d never had an interest in this franchise whatsoever but having been to a couple of the London filming locations at the tail end of last year I was intrigued to see those places in the film itself. Of course I do usually only go to places seen in movies which I’ve seen but this was one exception due to its fame and the fact that they were basically right under my nose.

I was with my sister Lorna at Leadenhall Market one evening when we went to see the doorway of ‘The Leaky Cauldron’ which contains the entrance to ‘Diagon Alley’ where Hagrid takes Harry to buy his wizard school supplies. In reality its an optician’s shop (below) at 42 Bulls Head Passage.

A few days after that I was waiting for Richard Richard at St Pancras when I popped over the road to King’s Cross Station. I found Platform 9 3/4 (below) which was actually filmed under the arched wall between platforms 4 and 5. 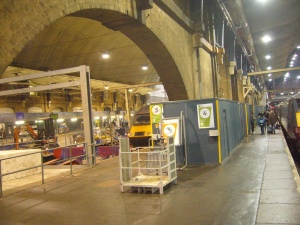 I didn’t know at that time that there is actually a photo opportunity close to the real platform 9 itself of the ‘platform 9 3/4’ sign with a trolley lodged halfway into the wall to create the effect of it going through the wall en-route to Hogwarts.

I have to say that after I’d seen these two places in the films opening half hour I did lose a bit of interest and failed to follow what was really going on. For the record, the other London locations used were the Reptile House at London Zoo and Australia House’s Exhibition Hall with its marble columns and chandeliers was ‘Gringott’s Bank’.