If twenty plus Bourne Supremacy locations in Berlin wasn’t enough I now present you with a few of the places in London that featured in ‘The Bourne Ultimatum‘ which is probably my favourite Bourne movie. Just over a year ago I went to Tangiers in the north of Morocco which played a major part in the third and final (?) part of the Bourne saga.

On 13 minutes we see a brief overhead shot of the The Guardian HQ at 119 Farringdon Road (below) in Clerkenwell. The rain was falling quite heavily when I was there so I didn’t p*ss about with setting up my tripod to get myself in the photo as is the norm. In fact I was getting so wet that I actually gave up on the location scouting as my flight back to Japan was that same evening and I didn’t want to be sitting on a 12 hour flight with soaking wet jeans. As it was I ended up with wet jeans on the plane anyway as the guy in front of me leaned his seat back so far that he spilled my drink over my leg. As it was I did get 2000 yen in cash from the airline for the inconvenience but I digress.

When we see ‘security correspondent’ Simon Ross (Paddy Considine) cross the road on his return to the Guardian offices it’s actually New Garden House (below) at 78-83 Hatton Garden. 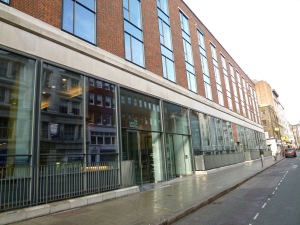 Two minutes later, he exits his workplace and quickly hails a cab to go and meet Jason Bourne.

Meanwhile, assassin Paz is waiting at the Malmaison hotel for orders from Blackbriar’s director Noah Vosen who calls him to go and assassinate Ross who he has been tracking. Malmaison (below) is at 18-21 Charterhouse Square near Smithfield market.

Undoubtedly the most famous London location is Waterloo Station (above) which I first went to with my mate Richard Richard just before the end of 2010. Our hero arranges to meet Ross at the south entrance and tries to guide him through the overly-crowded station away from a few hitmen.

Before entering the station, Bourne directs Ross around the York Road overpass area 18 minutes into the movie. The bus stop is still there although it has had a bit of a facelift since filming took place.

This series of cleverly constructed events sees the two finally come face to face on 19 mins outside the newsagent stand just outside the south exit. The place is now called Sweet Express but its pretty much the same as briefly seen in the film. Just before that we see Bourne walking over the bridge which takes people from York Road through the Shell Centre building to the station.

The crew were allowed to film at Waterloo during off-peak hours (i.e. mid-afternoon) so many of the people in the background are just normal people going about their normal lives.

Bourne surfs the net on 27 minutes using Ross’ notes to find the address of Daniels which he does at a place running parallel to Waterloo Station on Lower Marsh at number 132. It’s called Scootercaffe and, as the name hints, is some sort of cool scooter themed café.

Pamela Landy (Joan Allen) and Noah Vosen (David Strathaim) have a breakfast meeting on 29 mins at a fancy restaurant in New York City but in reality its the CC Bar at Chancery Court Hotel (below) on 252 High Holborn which is now closed. The real New York locations for ‘Bourne Ultimatum‘ as well as those featured in ‘Bourne Supremacy‘ can be seen here. 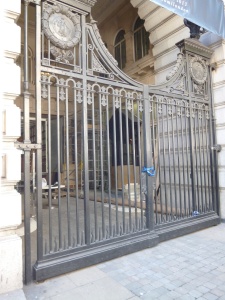 Crescent House on the Golden Lane Estate, Fann Road (below) supposedly features but I really could not find it when playing the DVD back! 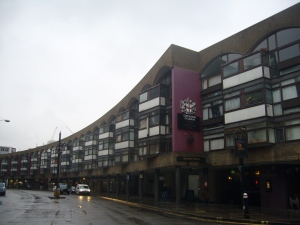 You can see my ‘Bourne Supremacy’ Berlin filming locations here.