Review: Films Set In Japan – The Barbarian And The Geisha (1958)

‘You Only Live Twice‘ or ‘Walk Don’t Run‘ may be the more famous of the older films set in Japan but I recently encountered one from nearly a decade before those. Of course I was very much aware of John Wayne as an enduring American icon before watching this but I had never seen any of his films in full and it seems that this particular one was a little different to his signature ones.

Chatrooms here in Japan are often full of foreigners living here complaining about all manner of things but if they think they are sometimes discriminated against then its nothing compared to the enormous hostility that Townsend Harris (John Wayne) and his helper Henry experienced when he was sent to 19th century Japan to serve as the first U.S. Consul-General in this country.

To the directors credit the film doesn’t do what many international films set in Japan do and have everyone speaking English all the time. There are significant amounts of Japanese dialogue with a voice-over updating the story throughout and Harris relies on his sidekick Henry to translate which is a common way for foreigner visitors to communicate here yet rarely used in films.

As the title implies the barbarian Harris attracts the attentions of a Geisha and sure enough we see the Geisha in performance; dancing, singing, playing the koto and entertaining to the sounds of the mysterious Orient. Her initial hostility and dislike inevitably turns to mutual respect and love. However, this human story only plays a small part in the scheme of things for the bigger picture is of the clash and conflicting interests between Japan; a traditionalist, internalised, isolationist country and the externalised rising nation of America. 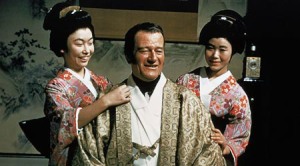 There are some dramatic scenes regarding cholera epidemic and the destruction of the town which results in Harris going to Edo to convince someone or another to open up the country. Japan just wants to be left alone but Harris, being a man who gets things done through the power of words and persuasion rather than brute force, tries to convince Japan that it is a nation importantly located at the crossroads of international shipping.

With the film being set long before the accelerated growth in the country it is quite nice to get a glimpse of Japan from a different era to what I know. The film was a bit of a box office flop and its maybe easy to say why as it’s plot isn’t too strong and the romance of the film isn’t exactly gonna set your heart racing. However, it does cover the intended topic with relative ease and the visual elements of the picture are sufficient enough to help you get through the 100 minutes without reaching for the remote control.

8 Responses to Review: Films Set In Japan – The Barbarian And The Geisha (1958)