When he’s not eating pickled plums, grooming his sideburns or teaching the future perfect continuous Tim Andrewartha is a Tokyo-based writer who had his first novel ‘Vitality‘ published earlier this year. TF caught up with the man we call Tim Andrewauthor (see what we’ve done there?!) last week over an Earth beer or three and probed him deeply about his book. 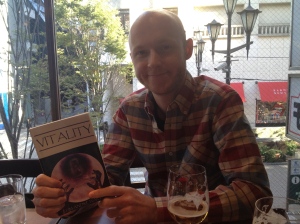 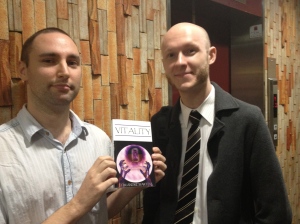 Talk us through the process of how this book came about then. The idea of Vitality started off as a short story that I wrote many years ago. It was inspired by reading Philip K Dick and cynically speculated about the extent in which a giant soft drink corporation might be willing to go. Originally the liquid was black rather than purple. When I decided to write a novel I thought this idea was worth exploring further.

So how far are you willing to go to publicise your book? Well, only so far really. I certainly wouldn’t be prepared to change my answers so as to promote an interviewer’s website if that’s what you’re getting at!

‘Vitality‘ actually came out on Valentines Day this year didn’t it? Do you think many couples used your book as foreplay? Well, my publisher’s intention for releasing it on Valentine’s Day was to offer an alternative for those readers who aren’t interested in the fluffy mainstream fodder that’s churned out on this day and would rather open their mind to a mind-bending alternative reality. So I think it’s unlikely that it’s been used for foreplay, but you never know.

Do you have an idea in mind for a sequel, prequel or a stand-alone novel? I’ve written another novel which I’m now editing. It’s set in Tokyo and it’s about a missing girl who reappears in a comic. The protagonist sets out to rescue her with a machine called The Reality Converter.

Oh, so this could be an opportunity for me to expand my Tokyo film and book locations further? Actually I haven’t mentioned any specific places by name, other than some of it taking place somewhere in Shinjuku, so that might be a bit tricky.

I do actually think ‘Vitality‘ would work well as a film so if miracles happen who would play Stylo Green and Emulla? I reckon Edward Norton would be good as Stylo Green, the paranoid graphic designer, and Scarlet Johansson would be good as Emulla, the rebellious redhead with a sexy voice.

What kind of reader do you think would be interested in reading ‘Vitality’? I think it would mainly appeal to readers who enjoy dystopian sci-fi (such as Philip K Dick, Jeff Noon or China Miéville).

There’s some stuff early on in the book about dirty phone calls. What research did you do on this matter? I never really do any research for my stories actually. I think that’s one of the advantages of writing this kind of imaginative fiction.

What have you yourself been reading recently? Some of the best books I’ve read recently are Channel SK1N by Jeff Noon, The Quantum Thief by Hannu Rajaniemi, Railsea by China Miéville and Helen Oyeyemi’s Mr Fox.

Are you sure you don’t mean Tokyo Fox?! Look, I’ve told you already, I’m just not willing to sink so low as to shamelessly endorse your site in this interview.

Every Tom, Dick & Willy has a book out at the moment ready for the Christmas market so why would anyone want to buy your book?! So they could submerse themselves in a strange world where the hinges of reality are loose and about to come apart at any moment. If that’s not the ideal escape from the tacky lights and shopping kerfuffle, then I don’t know what is.

How would you describe your book in a single tweet? A man who works for a “life-changing” soft drink company starts to suspect the truth that lies beneath their marketing subterfuge. 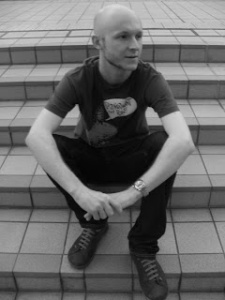 Tokyo Fox Review: Anyone who has seen ‘The Truman Show‘ (1998) will probably be able to empathise with Stylo Green; the main protagonist in this debut novel by Tim Andrewartha. Stylo works for ‘Vitality‘ which is a soft drink company promising to change peoples lives but as he is warned about their evilness by girlfriend Emulla it seems that, like Truman, there is no escape once he discovers something peculiar going on regarding his colleagues behavioural changes.

Andrewartha’s first book offers a hint of horror but naturally it’s mainly a science-fiction story set in an alternative version of the present day and whilst the fairly original plot is a stretch of the imagination it’s not so far removed that you can’t believe it wouldn’t happen somewhere in the world.

The nameless city where the hero Stylo works is an interesting place full of strange characters reading like a scene straight out of the Cantina Bar in Star Wars. There are some interesting quirky references throughout such as a woman being able to get favours for the simple reason that she speaks or the barman of a bar being a prune.

As someone who is not exactly a bookworm this novel admittedly took me a while to get really into but once past the background half I soon lapped it up and it was a real page-turner and no I don’t mean I was thankful of flicking through the pages just so I could get to the end!

‘Vitality‘ is avaiable now on Amazon. Don’t delay, order today…or something like that!