After an unwanted night back in Guatemala City I made sure I was at the Hedman Alas bus station (a few blocks away from my hotel) way before its scheduled 5am departure to ensure I got a ticket. No need to worry really as there were only about four of us on the bus to Copan Ruinas in Honduras. Thankfully, a mother was able to help sort out my days plan enabling me to actually stop in the area for a few hours before taking the bus at 2.30pm to capital city Tegucigalpa via San Pedro Sula which wasn’t too far away from where I started the day the previous morning! Oh well, you live and learn. 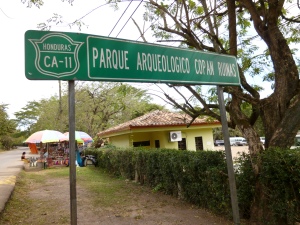 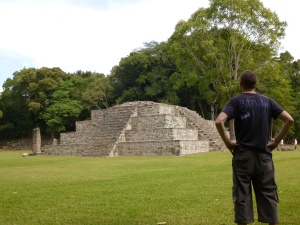 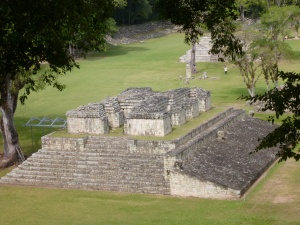 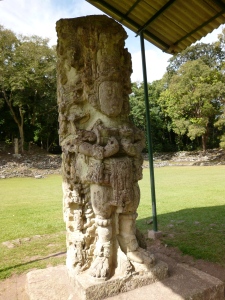 The ruins were about a kilometres walk away and pleasant enough with the detail of the carved stones most impressive but all-in-all the place wasn’t a patch on Tikal. A couple of hours wandering around the place was plentiful enough and even gave me the time to have a look around the town itself where I braved the street food seen below. 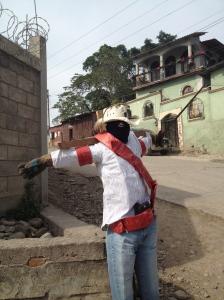 It was about 10.30pm on New Years Eve when I arrived in the dangerous and crime-ridden capital city of Tegucigalpa. Despite the bus area of Comayaguela not being one to linger I still thought I could make it to a hotel a few blocks away without problems and I tried but I really couldn’t get my bearings so returned to the station and ended up sharing a taxi with the last remaining person in the place. I uttered the words Hotel Union to the driver but with my inability to truly communicate in Spanish I really had no idea what was in store for me but after a ten minute drive I was amazed when we actually pulled up outside the place.

Sadly, no one answered the door so we tried next door at Hotel Heber where thankfully there was an answer and I managed to get a cell-like room (below) for $13 a night. There was no wi-fi but I did have satellite TV and saw New York enter 2013 on CNN at 11pm local time. An hour later I was watching (and listening to) fireworks and fire crackers going off all around the place from the roof of the hotel which sounds far more glamorous and interesting than it really was.

My New Years Day was mostly spent watching CNN as well as the ‘Friends‘ non-stop marathon on one of the channels. I braved the streets to find the bus station where I did manage to get confirmation that there were no buses until the next day. Good to do a dry run anyway in the murder capital of the world! See the chart above to see how bad the situation is. Thanks to Graeme for showing me that a couple of days before!

I went to an internet cafe over the road from my hotel where I was warned about the dangers of the area but I was getting bored being holed up in my room so returned to the same place to get the guy to book me a taxi to take me into the city as I thought I might as well see the actual city centre.

The place was full of policemen and army soldiers which was in a way reassuring for me. I saw some churches, the cathedral and other such prominent buildings in what was a small downtown area. However, most of my time was spent outside Burger King and in Wendy’s using their free wi-fi to catch up with all the New Years updates on Facebook and Twitter as well as downloading some podcasts for later listening. I had asked the taxi driver to pick me up again at 4pm but he never showed up which was a blessing in disguise as I managed to catch a shared taxi back for about 70 cents.

I was so mightily relieved on the 2nd to get the very last seat on the 9.30am Tica Bus to Managua in Nicaragua. That was mainly due to waking up early and getting to the office at opening time to book the damn thing.