After nearly 4.5 years living in north Tokyo the opportunity has come up to move onwards and indeed outwards. When I was pretty much forced to move out of my shared place in Ikebukuro in late 2008 I decided to re-locate to a spacious place in Kami Itabashi on the Tobu Tojo line and as much as I have loved living here I have decided to move a little closer to my workplaces which ironically is exactly why I moved here in the first place. Back then I was working at three schools very close to home and also had a girlfriend living close to hand but all of those things came to an end in the first half of my Kami Itabashi era. 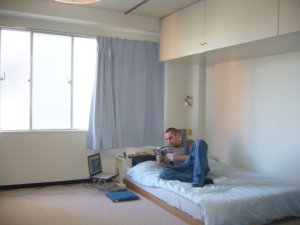 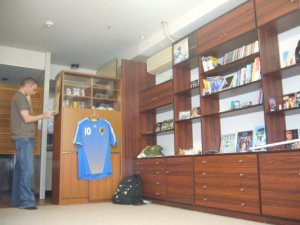 Above are a couple of shots taken when I first moved in, and with the place having an unbelievable amount of storage space its fair to say I have accumulated quite a lot of stuff over the years which is in stark contrast to when I came back to Japan many years ago with just a little rucksack and my faithful old backpack!

What I am looking forward to is having a bigger kitchen, a separate toilet and bathroom and some sort of balcony. A sofa to sit on and a bigger TV wouldn’t go amiss either! I’m also excited about having a new area to explore and being a little bit more in the heart of the city should bring me closer to modern architecture and international restaurants which are ongoing Facebook albums of mine and the latter in particular occasionally appears on this site too when I’m able to come up with some tenuous link to the country in question. Cycling to and from work and more frequent day trips (to be featured in the ‘Tokyo Daytripper’ series on here) are other benefits of moving out but of course it all depends on exactly where my new home will be located.