Sandstorm In Tokyo And A Lot Of Kafunsho (Pollen)

Almost two years to the day of the big earthquake there was a sandstorm in Tokyo earlier this afternoon which I witnessed first hand from the inside of the Keio line train around the Fuchu area of west Tokyo. With temperatures at a soaring 25 degrees celsius I was on my way to Tama Zoo and checking Facebook on my phone when friends pictures started to emerge online showing the skyline. I didn’t think too much until moments later I began to notice that the outside view was not that of its usual colours. I initially thought, in my not-looking-too-closely-state, that it was just a huge sandy coloured building when it suddenly dawned on me that we were experiencing a sandstorm which left me a bit shocked as I have never seen such a thing first hand. I felt like I was in a movie scene for I did not know what was going to happen next. This was certainly no Universal Studios type-tour and it reminded me of when young Anakin Skywalker took Padmé , Jar Jar Binks and Qui-Gon Jinn back to his home (below) in ‘Star Wars Episode I: The Phantom Menace‘ (1999) to seek refuge from the oncoming sandstorm. 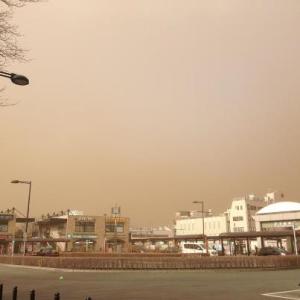 Whilst it may be a common sight on Tatooine a yellow-brown sky blurring visibility is not something you expect to see in a concrete jungle like Tokyo with no desert anywhere near. Thankfully by the time I reached my intended destination it had all erm pretty much blown over and normal life quickly resumed. Naturally the government denied that it was a sandstorm and maybe it technically wasn’t but as far as most locals are concerned it was. As I didn’t capture the moment on film myself I have nicked the photo above from my friend Misaki!

In other such wind-related news the pollen levels have been so bad this year that they actually went off the scale this weekend and were as high as all of last year which really is incredible. Although I suffered with hayfever as a child I had been fine for many years before suffering a little last year but this year has been horrible with constant sneezing and the frustration that comes with it as it seems like its never going to end.

A Leicester City fan teaching English in Japan
View all posts by tokyofox →
This entry was posted in Japan Life and tagged kafunsho, off the scale, pollen, sandstorm, sandstorm in tokyo, tatooine sandstorm, tokyo. Bookmark the permalink.