Shanghai 2013 Pt I: Meeting Up With My Mate Michael

It may be one of the shortest, easiest places to fly to from Tokyo but I had never visited Shanghai until this last weekend when I spent three nights across the pond in China’s most modern city. I don’t really count Hong Kong as proper China so Beijing in October 2007 is the only other time I’ve been to the worlds fastest growing economy. Memories of that trip seemed very distant as I arrived back in the city where I did a transit all those years ago. This time though I was all set to actually leave the airport!

I stayed at Piaoying Bund Hotel Shanghai in the Hong Kou District and was immediately impressed with what I got for the cheap price paid. However, the view was almost laughable, and while some people wouldn’t have been impressed, I was very content as the huge mud area outside the window (below) meant very little noise. I subsequently slept in on my first morning till quite late which probably wasn’t such a good thing. 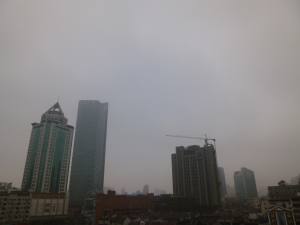 Before that though I saw a pretty grey and bleak looking (cloudy? polluted?!) skyline as you can see in the picture below which was taken close to my hotel. I went to meet up with my Canadian friend Michael who I did the TESOL course with back in 2009. I had no idea how to cross the river to get to Lujiazui so after seeing there was a ‘Bund sightseeing tunnel’ I went for that option thinking it was probably just a free tunnel to walk along with some exhibits on the walls along the way. 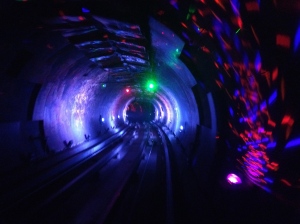 I was wrong as it was a cheesy train ride amid a load of flashing lights (above) and vague-related themes. It cost me 50 yuan but actually did save time in meeting Michael who has been living and working in Shanghai for just over a year now. He pointed out the Jinmao Tower, the Shanghai World Financial Center (I didn’t know which was which beforehand) and the Oriental Pearl TV Tower which is a symbol of Shanghai’s skyline. After that we went to eat. 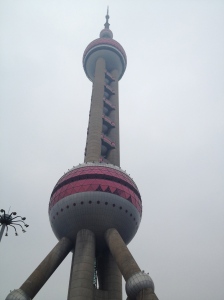 I had thought we would just be eating some night market food whilst sitting around on some cheap plastic stools but instead we ended up dining out at a restaurant called ‘South Memory‘ (Hunanese food) which had some very impressive views of the Bund skyline which sure is a sight to behold once its dark.

Whilst the service was nowhere near as good as in Japan (very few places are!) it was sufficient enough and the dishes kept on coming throughout the evening even if Michael did have to keep reminding the staff to bring our beers to the table! Over the night we tried all manner of weird and wonderful dishes which were expensive by Chinese standards but still very reasonable when compared to Japanese prices and the total cost was way cheaper than an average night out.

Some of the dishes we sampled were river-fish head with peppers & noodles (below), mabo dofu, duck tongue, a chicken dish, stinky tofu (a Hunanese delicacy), very spicy eggplant, pigs fingers, mushroom salad, egg plant and red peppers and some other stuff which I can’t remember!

Dining out with each other certainly wasn’t anything new to us as we had previously been to some restaurants in Tokyo most notably the eating locations in ‘Lost In Translation‘ (2003) and ‘Kill Bill‘ (2004). We had a great night catching up and reminiscing about our past trips the aforementioned restaurants as well as day trips to Enoshima, Sarushima and the cycling the Yamanote Line and A-Z station ventures of 2009-2010. 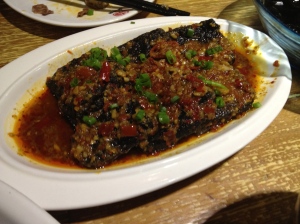 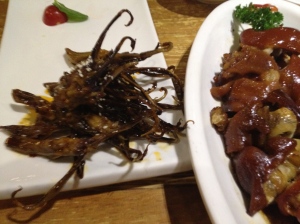 We had a quick walk along the river after dinner enjoying the fine views as well as a McDonalds kiosk-sized place which was a new thing for me. Sadly we couldn’t meet again as had hoped due to the lack of internet and wi-fi possibilities for me in a country where my usual means of communication are all blocked. 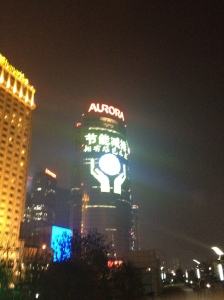 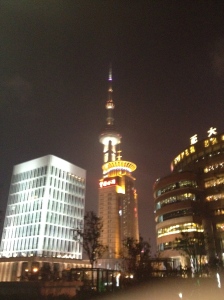 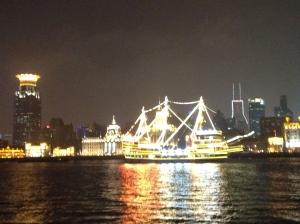