Indonesia was on the brain the other week when I was in an area of Shibuya where there are a couple of Indonesian restaurants and I thought I’d get in on the action. My first choice (based purely on the name!) was ‘Bali Monkey Cafe’ but as that was closed I popped round the corner to ‘Ayung Teras’ (20-12 Sakuragaoka-cho, Shibuya-ku) and I was not disappointed. 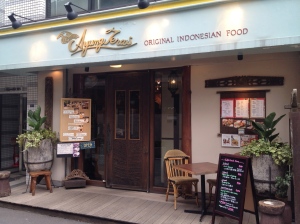 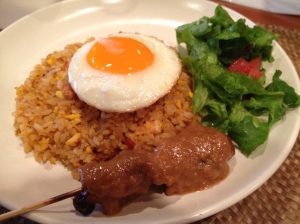 The restaurant has three lunch sets available and I plumped for the ‘A Lunch’ one which is Nasi Goreng. This is considered to be the national dish of Indonesia though there are a fair few other contenders. It basically means fried rice in Indonesian and featured very high on the list of CNN’s most delicious world foods a couple of years ago. A fairly simple dish in appearance you may think on seeing the pictures but the sweet soy sauce added to it makes it a delight to eat. I finished it in no time! 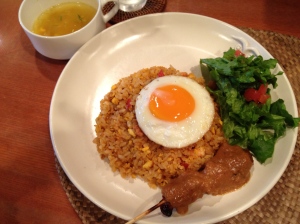 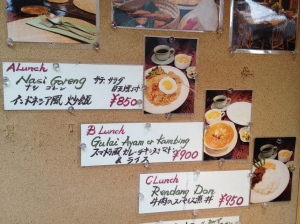 So why was Indonesia on the brain I hear you ask! Well, whilst I was with the majority of my family in Melbourne a year ago my sister and brother-in-law announced that they were strongly considering moving from Australia to Indonesia to set up or expand some sort of business or other. Well, a year on and that idea is actually being realised very soon when they move to an island in the north close to Singapore.

That last bit of news was almost music to my ears as I have never been to Indonesia or Singapore so am already thinking strongly about maybe doing a trip around that part of the world over the Christmas holidays at the end of this year. Of course this is just an idea at the moment but I do like the idea of flying into Bali and then working my way up through Jakata and the rest of Indonesia finishing on Batam before going on to Singapore and then continuing on to Malaysia’s capital Kuala Lumpur which is a part of that country I’ve never visited (apart from the Airport!). The reverse journey is also a possibility but early days yet and maybe I should actually let my sister know about these initial thoughts!!