Zojoji Temple a.k.a. The Wolverine Temple

So this is a bit of a first then as Tokyo Fox presents you with some filming locations for a movie that hasn’t even come out yet!! ‘The Wolverine‘ is the sixth installment in the X-Men film series and it is released at the end of July in most countries apart from Japan of course where the locals have to wait till mid-September. It’s fairly common that Japan is the last country to see an international film released but perhaps a bit surprising given that Tokyo features quite prominently.

Scenes were shot in late August 2012 at Tokyo Tower and Zojoji Temple which can be seen quite a bit in the trailer which is where I got the screenshots below from. The Main Hall is used for a funeral scene and it looks quite different from normal with the addition of lots of lanterns and cars going by where I’m standing, in presumably some sort of funeral procession. The Wolverine/Logan (Hugh Jackman) and Yukio are seen climbing the steps of the Main Hall with the sanmon (main gate) visible in the background. 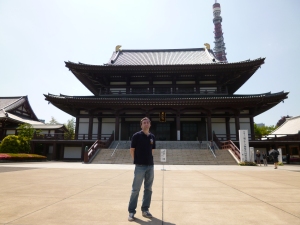 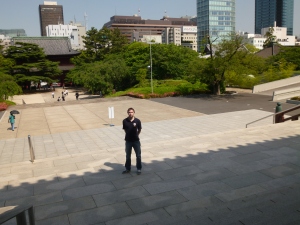 Despite the Star Wars obsession on this site I’m not actually such a big fan of sci-fi films or even comic book heroes but any regular reader of Tokyo Fox knows that I have a strong interest in any movie shot in Japan. In anticipation of this release I have been working my way through the previous films to get me ready for ‘The Wolverine‘ which I will watch and later review on this site in the Films ‘Set’ In Japan section; the first time I will have critiqued a film of such sort on its release.

If it wasn’t for the fact that I have a set of Spider-Man Top Trump cards (below), which I often use in lessons to help teach comparatives and superlatives, I wouldn’t have had any idea who the likes of Professor Xavier, Magneto, Storm or Iceman were! 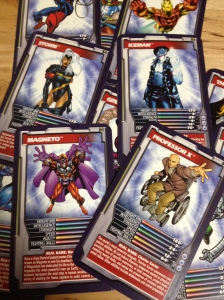 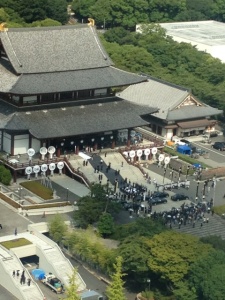 I can only assume that the shot (above) was taken either from a crane, helicopter or The Front Tower Shiba Koen although when I went up to the top on the 24th floor (and subsequently the 22nd, 21st, 20th, 19th, 18th….) I couldn’t get the view I wanted. For the record there is nothing on the 23rd floor and the views on each floor were all looking in the wrong direction with offices taking up space on the side I needed.

It’s also been rumoured that Nakagin Capsule Tower (below) at 8-6-10 Ginza can be seen at some point during the film which is a fine example of Tokyo modern architecture and was one of my favourite buildings in this article from last July. 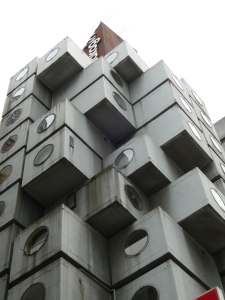 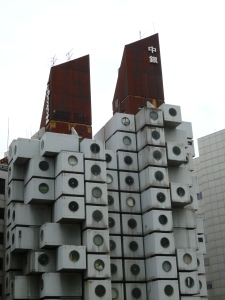 For your information, further filming took place at the start of September 2012 outside Fukuyama Station in Hiroshima-ken and in Tomonoura, a port in the Ichichi ward of Fukuyama but sadly I didn’t know about that when I was in Hiroshima earlier this month. If I did I could at least have got a shot of the station in anticipation that a similar one would be seen in ‘The Wolverine‘!

Parramatta in Sydney doubled up as a Japanese city and Sydney Olympic Park was made into a Japanese village draped in snow. Filming also took place on Brisbane Street in Surrey Hills which was transformed to look like a Japanese street with Japanese signs and vehicles scattered throughout…according to Wikipedia, so it must be true! 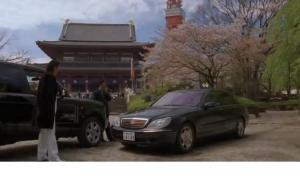 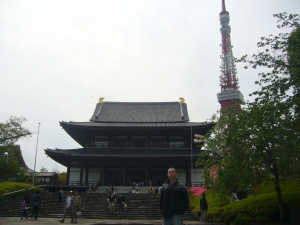 This isn’t the first time though that Zojoji Temple has featured in a movie for who can forget its appearance in the Steven Seagal classic ‘Into The Sun‘ (2005) where the main hall could be seen on 66 mins in the foreground of Tokyo Tower (above) whilst there was some meeting between the baddies though god knows why they chose to meet at such a public place! My not-so-perfect match-up of that film is also above. 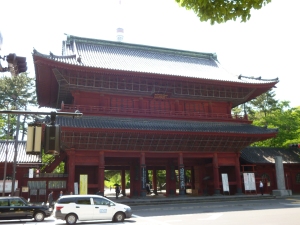 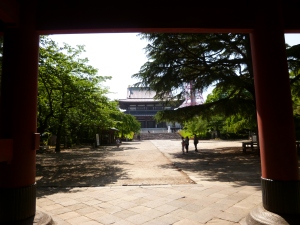 As for the temple itself, it is worth a visit in its own right and is included in the ‘Fodor’s Tokyo Top 25 Sights‘ guidebook and was therefore visited by me a few years ago when I cycled all 25 sights in one day. I have visited it half a dozen times now and definitely rate it as one of the best in Tokyo and along with Shiba Koen Park next door and Tokyo Tower nearby it all makes for a nice day trip within Tokyo. The two-storied sanmon was originally built in 1605 and is a rare example of early Edo-period architecture in Tokyo. After entering the complex through the sanmon (above) you soon come across a statue,  the stone image of buddha’s foot, a purification trough and the Great Bell of 1673 (3m high) which can all be seen in the four images below. 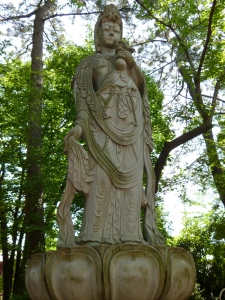 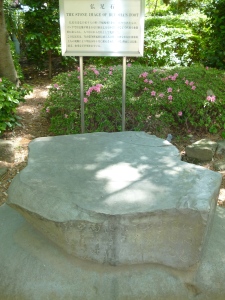 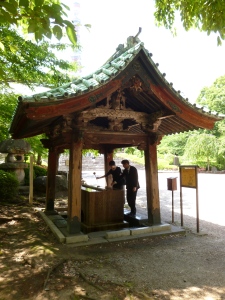 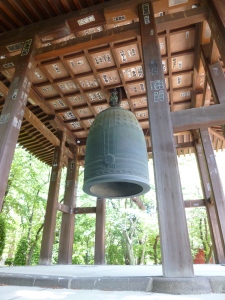 I guess this temple is most famous for its rows and rows of little statues of jizobosatsu (the protector of the souls of stillborn children) which are decorated with baby clothes, toys and little windmills. Dressed mostly in red baby bonnets the statues are colourful and sad at the same time. 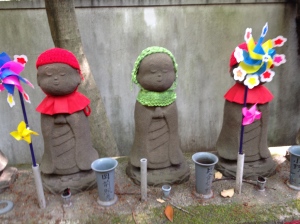 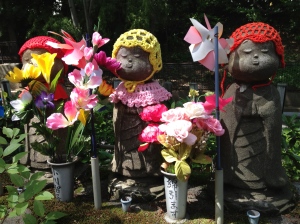 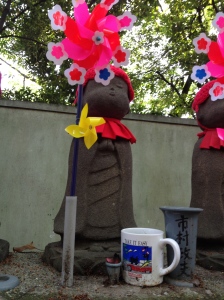 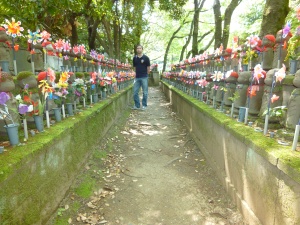 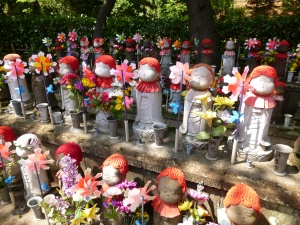 The building (below) standing in the background of the folded paper prayers and next to the Main Hall (seen from a different angle) is Ankokuden which houses the Black image of Amida Buddha and is used as a prayer hall as it is widely revered as a place that brings victory and wards off evil spirits. 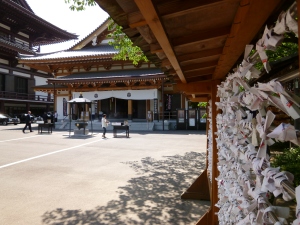 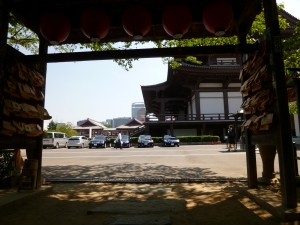 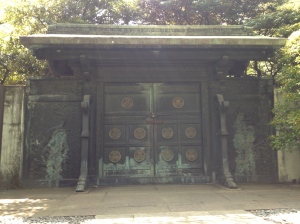 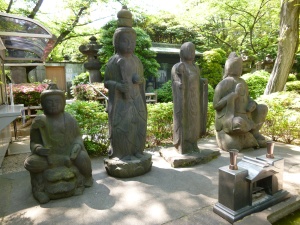 The two pictures above show the Mausoleum of the Tokugawa Shoguns, which is not normally open to the public apart from on certain days each year. The other picture is of the statues that stand in front of its gate.

‘The Wolverine‘ is released in the UK, the USA and most of the world on July 26th. It comes out in Japan on September 13th!

15 Responses to Zojoji Temple a.k.a. The Wolverine Temple