Teaching Kids To Read Via A Penalty Shoot-Out!

You’d think that after the penalty heartbreak suffered by Leicester City in the Play Offs last month that the last thing on my mind would be more penalties but this is a game to be used as an additional resource in English lessons for young learners ranging from Kindergarten to Lower Elementary or Higher Elementary.

To give you a bit of backstory, I bought a ‘Match Of The Day‘ annual four years ago for one of my students and inside was a game which I photocopied before handing over the gift. The basis of the game was just a dice roll with each number deciding whether its a miss or a goal. My initial thought was that this was a bit too simple and boring but that with a bit of a facelift it could be applied to helping kids learn to read.

This game features Premiership stars like Manchester United’s Wayne Rooney (pre-hair transplant) and the recently retired Michael Owen in a Newcastle shirt. It can be played on the table, floor or even the board with the students maybe doing their own scoring regarding a tick/circle or cross. If you need to make it slightly easier then you can place  the number word flashcards (in order) under the sheet to help the students with word recognition.

This game may only teach kids how to read or recognise number words one to six but there’s no reason why it can’t be adapted to include colour words, phonemic sounds, adjectives of emotion or any lexical items. More balls could easily be added but remember that a dice only has 6 sides and 12 (2 dice) is an awful lot of balls! Of course you would also need to put a key on the board detailing what each number correlates to! The game could even serve its original purpose which was just numbers and that could be used as a warmer/warm-down activity or to teach playgroup level students how to read numbers. Whilst I always have this copy to hand, it isn’t so necessary, as a simple matchstick and goalposts drawing on the whiteboard can easily be substituted in its place. 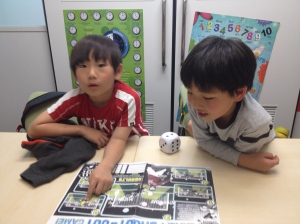 Naturally, when I have to join in the fun in private one-to-one lessons I invariably try and lose to keep the student happy but its quite hard to fix this game (though I’m sure I still could!) as the result against one of my students below shows! 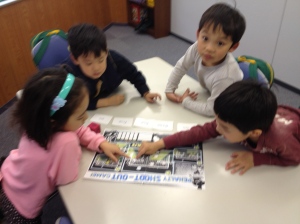 Overall, this simple game has been my most successful game/activity for motivating the young kids to bother taking the effort to try and read or recognise the words. He shoots, he scores! Game on!

2 Responses to Teaching Kids To Read Via A Penalty Shoot-Out!