An all-star cast turned up for this fictional sideline to a key incident in both American and Japanese history but ultimately they were let down by a poor script as well as a lack of direction, choreography and editing.

The story centres around a treaty which Commodore Matthew Perry came to Japan to get signed by the Shogun in 1854. He brought American technology with him and in return the Shogun wanted to send a national treasure back to the American President as a gift. From that exchange we have our film title! The Bushido Blade is a sword representing the Samurai code and all that Japan holds dear.

Anyway, this ceremonial sword is stolen by a group of rebels led by Lord Yamato (played by Tetsuru Tamba who was Tiger Tanaka in 1967’s Bond film ‘You Only Live Twice‘) who are against the modernisation of Japan and want to keep it’s isolationist policy. The Shogun then refuse to sign the treaty until the sword has been recovered. 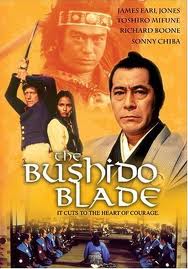 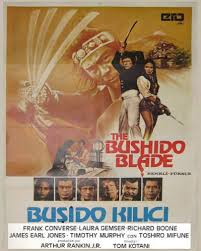 Three American sailors are despatched in pursuit of the blade where they come across Prince Ido (played by Sonny Chiba who appeared in ‘Kill Bill: Volume I’) and a number of prisoners led by a shipwrecked captain played by a much under-used James Earl Jones. They amazingly encounter Japanese people (such as the guy from ‘Conan The Barbarian‘) who seem to speak English which is highly unlikely in 1854 Japan when the country was completely closed off.

There are numerous encounters with a variety of Japanese women in the countryside including a half-Japanese, English-speaking Samurai lady called Tomoe (played by Laura Gemser of ‘Emmanuelle‘ fame). She may have provided some good eye candy (and take her clothes off!) but I found many of her scenes to be unintentionally funny at times. When she’s accused of not appearing to look Japanese she defends herself with some poorly delivered line about her father being a foreigner, her mother from a respected samurai family and that she was born in a traders compound in Nagasaki. As for the Japanese actresses they didn’t even get any substantial lines including the woman who played Yuki who was a half important character.

When I purchased this dvd online a couple of years ago I didn’t realise I would be getting a German-language copy. After some nervy moments at the start I was relieved to be able to switch the language to English not that it really mattered too much in the end given the poor dialogue the actors were given to work with. Furthermore, when they weren’t reading badly scripted lines the actors were doing other “filler” activities like a rather silly pointless scene in the middle of the movie at a shrine where there’s a sumo match involving one of the burly sailors taking on a sumo wrestler in one of the film’s needless comical detours.

Overall, the premise of the story and the cast involved promised way more than what we got in this low budget film which was an average film at best and may only be of interest to Japan buffs and samurai fans. The storyline is easy to follow, the film is short but there are many unanswered questions like how on earth it was stolen in the first place. Surely a legendary blade would be better guarded! Would the Shogun really send it to America? Did any of this really matter since ultimately the treaty was signed with the blade not present thereby meaning that the 80 minutes adventure preceding it was entirely void and pointless?!!