Dining Out: The Hooters Tokyo Crawl

With my American friend Ethan back in town for a brief visit recently, we met up in a sophisticated and upmarket part of Tokyo for a spot of lunch one afternoon with that restaurant being…….Hooters Ginza!!

For anyone who doesn’t know, the Hooters chain of restaurants originally started in the USA and are famous for its Hooters girls; the waitresses who wear the regulation uniform consisting of white tank top (with the Hootie the Owl logo on it) and short nylon orange running shorts. Oh and they’ve also usually got a sizeable pair of breasts!!

These restaurants are fairly new to Tokyo and are supposed to be family restaurants and whilst Ethan may take his wife and kid to his local one back in Texas the place was full of mostly men. It was my first trip to Hooters since I made my debut at the one in El Paso back in 2011 on my American adventure in the Summer. 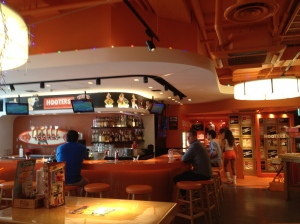 The place was fairly spacious inside, especially by Tokyo standards, and scattered with a few groups of people including a family. Ethan and I caught up with each other and chatted the usual nonsense. He even gave me a belated birthday present which I then had to carry around all day and on top of that we got to meet Miss Hooters Japan 2013!

I had been looking forward to tasting their fried pickles and dip (880 yen) which were washed down with a couple of Asahi Super Dry’s (680 yen each) and we were all set to have lunch there too but as our attender Ayako had given us some free beer coupons for the Hooters beer garden in Otemachi, we decided to hunt the place down. Having seen that it was within walking distance we wandered on over to have lunch at the place which was temporarily erected for the summer months. 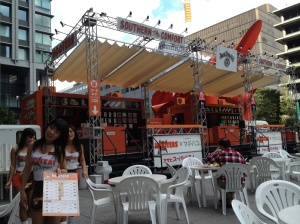 We weren’t so impressed with the set-up and with the food menu being quite limited we had no choice but to just finish our free beers and complete the Hooters Tokyo trilogy set and visit the original restaurant in Akasaka-Mitsuke.

This place was far more lively than the others and the table next to us had someone celebrating their birthday and all the hooters girls came on over and clapped, sang and cheered. The kind of stuff I usually hate as no-one else in these places gives a toss about it being some strangers birthday and thereby having their own outing interrupted.

Unlike in the States, this Hooters in particular was very Japanified as there was a group dancing and singing session later on more akin to that of the maid cafe’s of Akihabara. The afternoon drinking continued for us and we finally got something to eat. I had a Hooters burger with swiss cheese and potato salad (1530 yen) which brought to us by our server Sayumi. 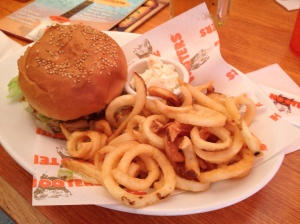 Later on, I went to the toilet and of course this is not the kind of thing one mentions in a serious restaurant review of such classy establishments but a few minutes after I returned the birthday music started up again and all the girls proceeded towards us as I started to think “oh, here we go again!”. However, they continued on in our direction and what do you know but funny-man Ethan had set it all up for me whilst I had been in the little boys room. All a little embarrassing but harmless fun and I guess an easy way of getting some proper legitimate pics of the hooters girls! 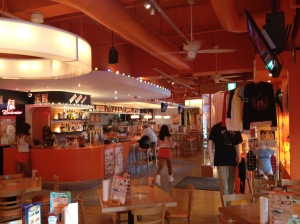 So that was it then. An unexpected crawl of all the Hooters restaurants in Tokyo in one afternoon and the drinking continued in a few more regular places after that.

3 Responses to Dining Out: The Hooters Tokyo Crawl