Japanese people are famed throughout the world for conforming to society and following rules to the letter of the law unlike in the west where such things result in many of us seeing how far we can bend or get round them.

However, if you dig a little deeper then you can see a few examples of rules which are mostly ignored by a big share of Japanese people and before anyone jumps on their moral high horse, yes, I am aware that these rules may be broken in other countries too. Don’t take this too serious as its just for fun! This is the Tokyo Fox top 5.

1. Using mobiles in the priority seat area – By far the most common rule to be broken. All trains have priority seats at both ends of each carriage with signs above the seats telling passengers to switch off their mobile phone in that area. It is largely ignored. 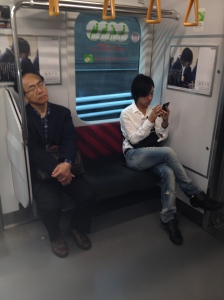 2. Cycling the wrong way down the road – Japan may be a highly developed country but its cyclists are akin to that found in the third world, especially when they disregard laws which are supposed to prevent cyclists from riding against the flow of traffic. From December 13th this year cyclists who disobey this rule may face up to 30 days in prison or a fine of ¥20,000 but given that the police rarely enforce these laws I won’t be holding my breath on that one to change anything. I could probably do a whole top five on just cycling rules which are broken. That’s one for a later date!

3. Going up and down station steps on the wrong side – Maybe not such a major one but the other day I couldn’t even go up the steps I wanted to due to the up side (station steps in Japan stations are marked with up and down sides) being full of hundreds of commuters going down the steps. It’s a common sight to see passengers ascending and descending on the wrong side. 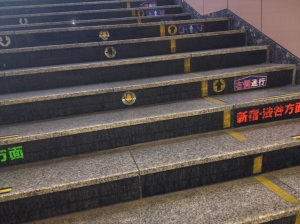 4. Disposing of broken umbrellas – The Japanese are generally very clean and efficient when it comes to disposing of their rubbish whether it be at home or in the streets. There are pretty much no public bins anywhere and the streets tend to stay clean. However, there are quite a few typhoons in Japan and the locals are quite possibly the most umbrella-conscious nation. Of course these cheap plastic umbrella’s can’t hold up against gale force winds and inevitably break leading to people just dumping them on the streets in huge piles.

5. Walking in the cycle section at road crossings – At many road crossings there is a section at the side designated for cyclists but it’s often a free-for-all once the little green man starts flashing and many, many people begin to cross the road. Of course the cyclists are far from perfect and often think they are a law to themselves and cycle in the much larger pedestrian section or even try and cut through it.