Tokyo Daytripper: From Russia With Love

It’s the largest country in the world covering more than one-eighth of the Earth’s inhabited land area. I may have visited a handful of countries around the world but I’ve never truly visited Russia although I have actually been to Moscow airport on an Aeroflot transit between Tokyo and London many years ago. I’ve also been to quite a few filming locations which doubled-up as Russia (GoldenEye, The Saint, Air Force One and The Bourne Supremacy) but am still yet to step foot in the real St Petersburg or Moscow.

One place where I never expected to experience anything Russian (food and vodka excluded!) was in Tokyo but whilst browsing through my copy of ‘Tokyo Adventures’ by Tae Moriyama I discovered that there was an example of Byzantine-style architecture in Ochanomizu. Nikolai Cathedral, in its present guise, has been around since 1929 after the original was completely destroyed during the great Kanto earthquake six years earlier. 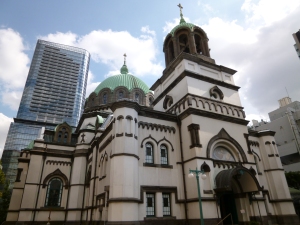 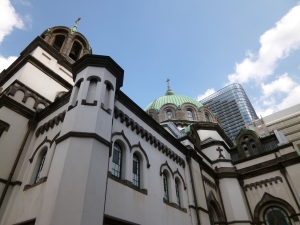 Its distinctive green dome and high old stone walls gives the cathedral a very recognisable identity not fitting in with the rest of the area’s identikit office blocks. Nikolai-do, as its known in Japanese, is named after St. Nicholas Kasatkin (1836-1912) who was the founder of the cathedral. 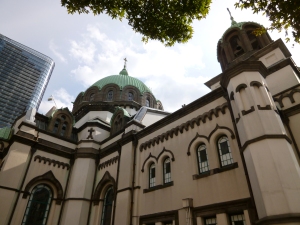 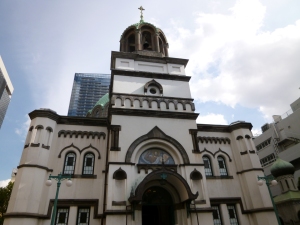 It can be found around the corner from Yureizaka (a.k.a. ghost street as featured in my Metropolis article!) and pretty close to the Japan World Cup Museum, Matsuya (a soba restaurant and not the gyu-don chain!) and the Kanda River of which all have appeared on this site before. Throw them all together into one super-Ochanomizu package and you’ve got a day trip in the making.

Entrance is supposed to be 300 yen although for some reason I only got charged 100 yen and that included a candle. The fee is a recommended donation but given that there’s a kind of reception desk on the right as you enter there doesn’t seem to be much choice unless you’re the kind of person who likes confrontation! 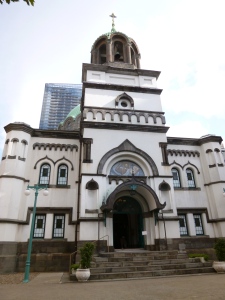 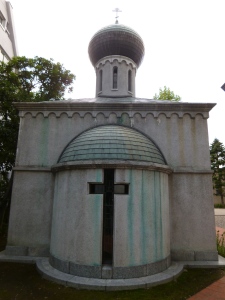 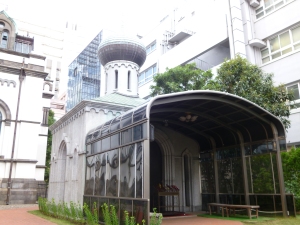 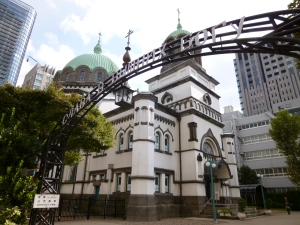 It’s not really worth the money in my opinion as you can only go within a certain restricted zone near the entrance unless you’re attending one of the services on Saturday evenings (18:00) or Sunday mornings (10:00). However, from the outside its an impressive sight and deserving of a few moments of anyone who is passing by. 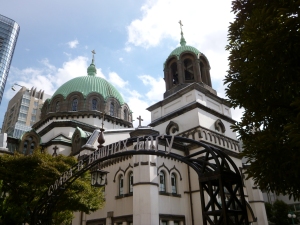 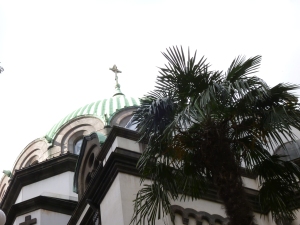 Whilst we’re on a Russian theme I may as well take the opportunity to lump a couple of pictures from ‘Sungari‘ in as well. This is a Russian (and Georgian) restaurant on the west side of Shinjuku located just a minute or two away from the JR West gate. When I went for lunch there recently there was a queue outside but once I got inside I had classic borscht consisting of beets, cabbage, onions, potatoes and tomatoes served with herbs and sour cream in a soup. The set also came with homemade rye bread and creamed mushroom and white asparagus served in a small pot which is all a bit more Ukrainian style. 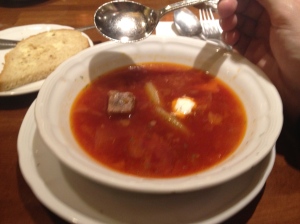 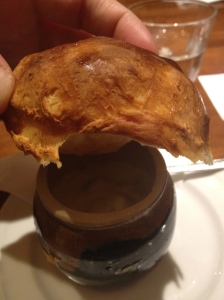 4 Responses to Tokyo Daytripper: From Russia With Love