As promised at the tail end of the last entry here then is the #BigNews of what happened during our time in Myanmar (formerly Burma). After eight years of world travel, movie locations, English teaching ideas, restaurant reviews and so on, there is finally an announcement on Tokyo Fox which may, just may interest some of my actual friends.

I proposed to my girlfriend on Christmas Day and she said yes!

That line should be enough to satisfy many people but for those wanting to know the details and the backstory, please read on…

A couple of days before we began our trip I went to buy her the engagement ring in Shinjuku. Now, I thought you could only get breakfast at Tiffany’s but it seems this store also sells rings! I’d been carrying this diamond ring (wrapped in bubble wrap and in a plastic bag tied up) with me for a few days; firstly in my big backpack in Malaysia and then in my little rucksack. Needless to say that I was a little nervous every time my girlfriend went in the rucksack at Shwedagaon Paya where at one stage she even took out the bag it was in and put it on the floor whilst applying some sun cream! I was planning to pop the big question at this stunning golden pagoda but it was all a bit too public for my liking…..and the fact that we had an argument didn’t help either!!

Not wanting to get interrupted by a vendor at a critical moment or for a local scoundrel to see me presenting an expensive diamond ring in public I decided that a different place would be more suitable and safer option not that I ever felt that Yangon was in any way a dangerous place.

Back in our twin bed room (no bed sharing till after the wedding! haha!) at Agga Guest House a few hours later I was aware that we were soon going to be Skyping my folks and likewise for her parents so I thought it was best to hurry things along a bit so that we could announce the news then and there rather than having to try to get hold of them later on again in a country where wi-fi is not that common or reliable!

That Christmas morning I had woken and suddenly had the thought of whether to present her with the box (with the ring in it) or just the ring to which my googling of it didn’t help too much. Eventually I chose the former and so with not too much happening I told her to sit on the edge of the bed as I said I had something for her. 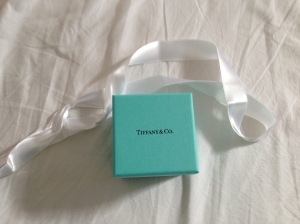 As soon as I took the package out of the bag she shrieked with delight as she could see the green colour of the Tiffany’s box through the carrier bag and knew what was about to happen. The next few moments passed by in an instant as she excitedly unwrapped the ribbon and opened the box. I took out the ring, went down on one knee and said “Kekkon shite kudasai which is the Japanese equivalent of “Will you marry me?’ although in reality its more like “Lets get married”.

To mark the occasion I cracked open a warm can of ‘Myanmar Beer’ and cheesily played the ‘Diamonds Are Forever‘ 007 theme by Shirley Bassey and moments later we were relaying the news on Skype to our parents one after the other. 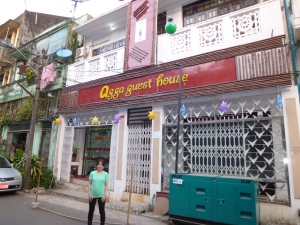 To celebrate the good news we went out for dinner in style! First of all we took the cheapest, dirtiest local bus down to Sule Pagoda (it was the only place/landmark I could think of to say!) and the young bus conductor couldn’t have been more helpful in looking after us. Of course I already knew exactly where our destination was but as we were only communicating via body language I decided to just let it be.

Motorcycles are outlawed in Yangon so these packed local buses are often the way to travel around. After a walk around town we ended up back on 19th street where we had been the previous night. Time for another barbecue on the streets where you put your skewers of meat, fish and vegetables in a basket and they then cook them for you. All this was washed down with a few Myanmar Beer’s (coke for her!) and we briefly practiced the kind of kissing sound you have to make to attract the waiters attention each time. Don’t try that in the western world!! 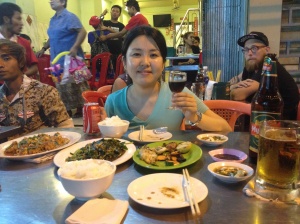 That was it for our short time in Myanmar’s capital but it was most definitely a case of it being Yan-gone but not forgotten!!

Next: Moving on to Bangkok

A Leicester City fan teaching English in Japan
View all posts by tokyofox →
This entry was posted in Asia Travel and tagged 19th street Yangon, Agga Guest house yangon, myanmar, popping the question, to propose with box or just ring, tokyofox in a relationship, who is tokyo fox? tokyofox girlfriend, yangon in 2 days. Bookmark the permalink.