Having seen the opening episode on Thailand I have to admit I wasn’t expecting too much excitement in episode 2 in Japan. Both episodes were mildly interesting for me but I imagine they weren’t too captivating for whoever was tuning in on ITV2 to see them……..if they wanted to see in-depth travel-related matter! However, if they just wanted to see some mindless entertainment and a very pleasant, mild mannered and humble young man experience a bit of actual living then this was the perfect showcase for it!

Not much really happened in either the Thailand or Japan episodes and Tom didn’t really have too many words of wisdom to add to the pictures we saw. Of course he’s been training to dive since a very young age so hasn’t had the kind of normal life that most people have had. He’s never been backpacking so this style of travel is all new to him and he can’t be blamed for taking up the opportunity to make this series as ITV continue to do their best to promote him as a TV personality. He wasn’t alone though as he had best friend Sophie with him for support. Of course they’re not an item given Daly’s announcement back in December last year that he was in a relationship with a man. Who knows what everyone was thinking last Summer though when it was filmed!

Beforehand I was expecting yet another typical UK television programme following the same old tired format and while its not wildly different or life-changing at least this programme did feature a few things I’ve not seen on TV in the past and amazingly the ‘Turning Japanese‘ song never featured once!!

Kumamoto appears in the final half which took me greatly surprise, and as we’re going there next month I was delighted to see some scenes of a place I know very little about. Tom and Sophie went there to join in with a lantern festival where Tom held the mikoshi (portable shrine) during a parade which to be fair wasn’t particularly interesting to watch and almost makes you realise why producers crave the crazy stuff most of the time.

In episode one we had tension supposedly building up ahead of Tom’s big charity skydive in Bangkok and the threat of whether he would or wouldn’t be able to do it due to the quite dramatic thunderstorms. What symmetry in this Japan episode then as a very similar situation occurred at Mount Kuratake (originally intended to be at Mount Aso but changed due to the weather) with his paragliding venture. Can’t say I was on the edge of my seat! With a bungy jump coming up in New Zealand for episode 3 this series is perhaps closer to Jack Osbourne’s ‘Adrenaline Junkie‘ series than his sister Kelly’s ‘Turning Japanese‘ one, both of which were also on ITV2!

Long before that, the pair arrived in Tokyo and started off in the electric town of Akihabara where they spent the night at a manga cafe. These places are everywhere in Tokyo and used as hotels by some people who want cheap shelter for the night….and some wi-fi action. There are also usually manga comics galore, video games, drinks, snacks and communal bathrooms but there are no beds! This seemed to bemuse Tom and his trusted companion who seemed to think they were staying at some kind of hostel. It’s basically just a place to crash for the night and once realised they start to embrace the idea a bit more. 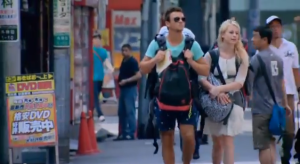 What followed thereafter was more of the usual tried and tested formula of portraying the whacky side of Tokyo as they did some cosplay and karaoke supposedly with some people they just met. Actually there were quite a few obviously set-up situations throughout which were made to appear like they were just chance encounters. 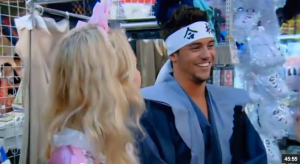 I really ought to make a Bingo game of stereotypical Japan references on UK TV (sushi, robots, toilets, sumo, maid cafes, sumo etc) for viewers to play whilst watching these shows and this one included the ubiquitous mention of bullet trains and geisha! 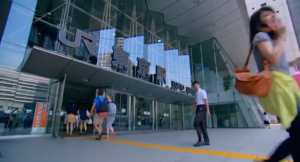 Tom and Sophie take the former from Tokyo station to the Gion district of Kyoto where they meet a maiko and get invited to a teahouse for some traditional food and a dance. 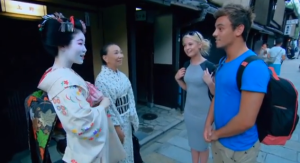 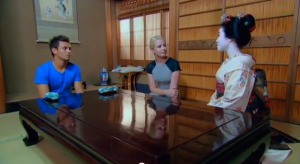 Tom Daley is of course a bit of a British icon and for someone who is only 19 he has a wise head on such young shoulders. He’s nothing but likeable and it’s not his fault that the programme comes across, in terms of content, as being a little grey at times. It’s just that its yet more typically tacky fodder from ITV2 where little thought has really gone into the show beyond the “oh lets just send this popular young celebrity to some far flung places and see what happens” type attitude.